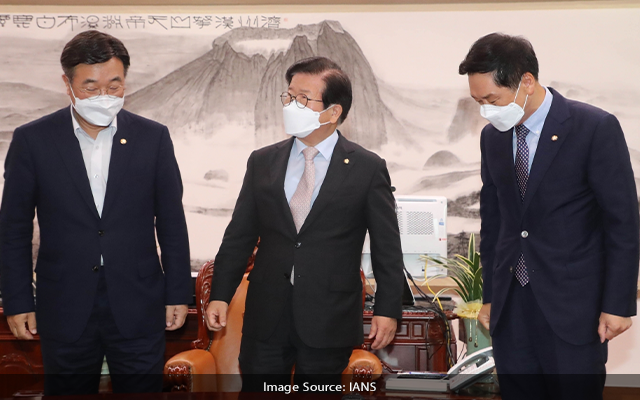 The floor leaders of the ruling Democratic Party (DP) and the main opposition People Power Party (PPP) and six other lawmakers from them were to meet in the morning in the final round of bipartisan talks over the bill, reports Yonhap News Agency.

The ruling party-proposed amendment to the media arbitration act, centred on strengthening punitive damages against fake news, has been under bipartisan negotiations for nearly a month after the DP stepped back from its initial plan to advance it through a plenary parliamentary meeting in late August.

The ruling party did so as the revision, designed to impose punitive damages up to five times more than usual on media outlets found guilty of publishing false or manipulated news reports, came under criticism from local and international entities it could potentially undermine press rights.

An eight-person bipartisan consultative body, formed to smooth out the disputed revision proposal, has met on more than 10 occasions over the course of the past month, including on Sunday, but failed to produce an outcome.

At dispute have been a couple of clauses dictating the definition of disinformation punishable under the bill as well as fivefold punitive damages, which local and global media associations accused of harming the freedom of the media.

The DP has tried to bargain for an alternative bill that relaxes the initially proposed fivefold damages to threefold or 50 million won ($42,538) and redefines reports punishable under the bill as those “that are not truthful”, only to run into strong objection by the PPP.

The DP warned last week it will press ahead with its plan to advance the bill through a plenary National Assembly session on Monday, as agreed with the PPP last month, with or without the main opposition’s endorsement.

Controlling 169 seats of the unicameral 300-member assembly, the DP has the power to pass a bill on its own.

The PPP, meanwhile, has warned it will launch a filibuster to block the bill if the DP unilaterally put it to a plenary vote.