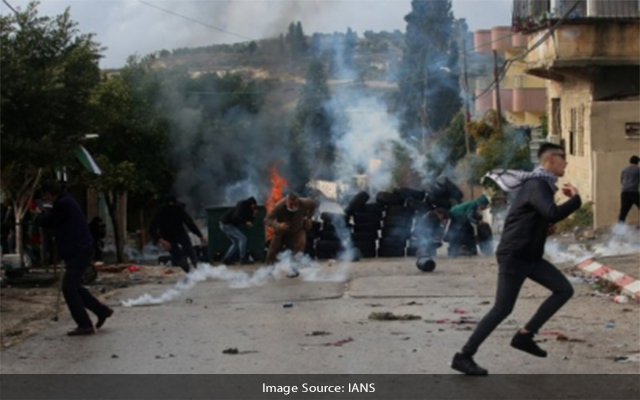 Ramallah: More than 130 Palestinian protesters were injured during clashes with Israeli soldiers in the West Bank, according to medics.

Witnesses said the fierce clashes broke out on Friday March 4 near the villages of Beita and Beit Dajan, located to the south and east of Nablus city respectively, and near the village of Kafr Qaddum, east of Qaqilya city, reports Xinhua news agency.

The Palestine Red Crescent Society said in a statement sent to Xinhua that at least 128 Palestinian demonstrators were injured, including 36 by rubber bullets fired by Israeli soldiers.

The others suffered from inhaling the teargas, the statement added.

Meanwhile, Murad Ishteiwi, the Palestinian coordinator of the popular resistance in Qalqilya, told Xinhua that two more protesters were injured by rubber bullets during clashes with the Israeli soldiers in the Kafr Qaddum village.

The witnesses said dozens of anti-settlement demonstrators threw stones at the Israeli soldiers stationed at the outskirts of the villages and burned tires.

Beita and Beit Dajan have seen weekly protests against the expansion of Israeli settlements in the two villages and clashes with the Israeli soldiers.

The city witnesses weekly confrontations every Friday in protest of Israel’s settlement policy and the closure of large parts of the city centre to the Palestinians.