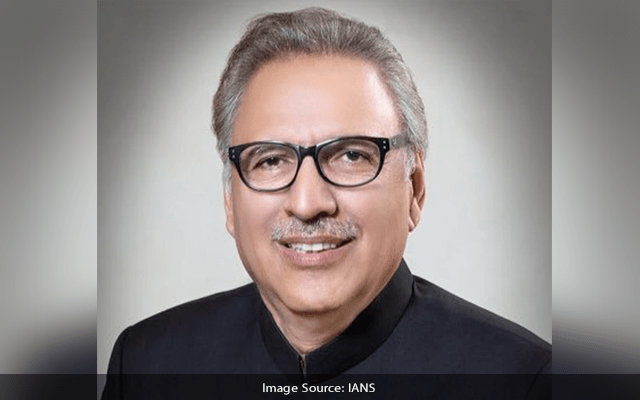 Islamabad: Pakistan President Arif Alvi on Wednesday asked the Election Commission of Pakistan (ECP) to propose dates for the next general elections, which will be held within 90 days following the dissolution of the National Assembly, The News reported.

“In a letter dated April 5, 2022 addressed to ECP, the President’s Secretariat asked to propose date(s) for holding general elections within 90 days from the date of dissolution of the National Assembly, i.e., April 3, in accordance with the provisions of the Constitution of Pakistan,” the Pak President House said in a statement.

The letter mentioned that the ECP has been conveyed that clause 5 (A) of the Article 48 and clause 2 of Article 224 of the Constitution provide that the president shall appoint a date, not later than 90 days from the date of dissolution of the National Assembly, for holding general elections to the National Assembly.

“In order to carry out the mandate of the Constitution of announcing the date of general elections, consultation with the Election Commission is required under Section 57(1) of the Elections Act, 2017,” the letter stated.

It is pertinent to mention that the president had dissolved the National Assembly on the advice of Pak Prime Minister Imran Khan on April 3 following a controversial ruling of Deputy Speaker Qasim Suri rejecting the no-trust motion against the premier, plunging the country in a constitutional crisis.

The president had also written a letter to the Prime Minister and Leader of the Opposition Shehbaz Sharif to recommend names for the caretaker prime minister.

To this, the PTI nominated former chief justice Gulzar Ahmed, while the PML-N president denied receiving the letter officially and said he would consult other opposition leaders in this regard.