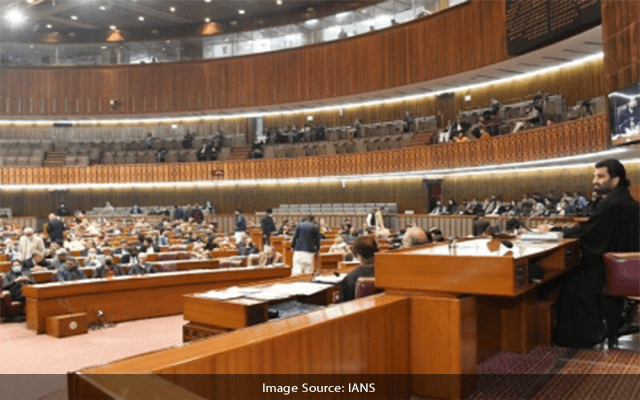 Islamabad: The crucial session for the no-confidence motion against Prime Minister Imran Khan which started after much delay was adjourned till Sunday, Geo News reported.

The Pakistan National Assembly Secretariat had issued the order of the day for Thursday on Wednesday night, with a discussion on the no-trust move against the premier on the session’s agenda.

The session was held under the chairmanship of NA Deputy Speaker Qasim Suri, with more than 172 members from the Opposition benches in attendance.

As the session kicked off, during the question and answer session, all the Opposition members demanded the deputy speaker allow voting on the no-confidence motion.

At this, Suri said due to the “non-serious” attitude of the Opposition lawmakers, the session is being adjourned till Sunday — almost 10 minutes after it had started, Geo News reported.

PM Imran Khan has seemingly lost the majority in the lower house after PTI’s allies — MQM-P, BAP, JWP, independent MNA from Balochistan Aslam Bhootani — decided to side with the Opposition.

The prime minister, after the allies started leaving the government’s camp, has time and again repeated that he will not resign and “fight till the last ball”.

PM Imran Khan, who waved a “threat letter” at a March 27 rally in Islamabad, has said that the memo warned the country of the consequences if the no-confidence motion does not pass.

As the Opposition’s number game got stronger, PM Imran Khan had earlier offered to dissolve the assembly if the no-confidence motion against him is withdrawn, sources told Geo News.

According to sources, an “important personality” has given a message of PM Imran Khan to the Leader of the Opposition in the National Assembly Shahbaz Sharif.

This was revealed during the meeting of the Opposition leaders on Thursday ahead of the crucial National Assembly session for the debate on the no-confidence motion.

It was shared that the premier has asked for a “safe passage” amid a deepening political crisis.