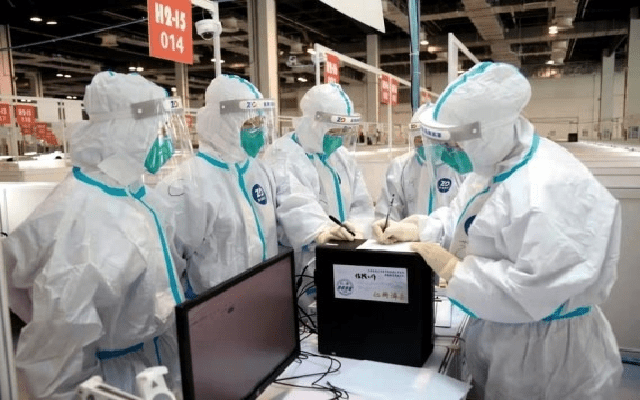 Shanghai: Shanghai will launch a Covid-19 nucleic acid testing campaign in areas west of the Huangpu River starting from Friday April 1 amid the second phase of the city’s nine-day lockdown, an official announced on Thursday March 31.

This round of testing will involve 16 million people, and 12 districts will be put under closed-off management, said Ma Chunlei, secretary-general of the Shanghai municipal people’s government.

Ma said the authorities were making efforts to improve the provision of food supplies as well as address issues with seeking medical help.

Due to a fresh Covid-19 resurgence since nearly a month now, the lockdown, which is the largest in China since the onset of the pandemic two years ago, came into force on Monday and it will be imposed in two phases.

From 5 a.m. March 28 to 5 a.m. April 1, temporary closed-off management will be enforced in regions lying to the east and south of the Huangpu River, including Pudong and its adjacent areas, to carry out nucleic acid testing.

Then from 3 a.m. on April 1 to 3 a.m. on April 5, similar temporary closed-off management and testing will be launched mainly in urban districts west of the Huangpu River.

In affected areas, residents will be required to stay indoors, while non-contact delivery of necessities will be allowed.

Besides, all enterprises, except those necessary for ensuring the people’s daily needs and the city’s operation, will run under closed-off management or have their employees work from home.

Meanwhile, services including bus, subway, ferry, taxi and online ride-hailing will be suspended in the areas under closed management.

The latest measure in Shanghai comes after the entire Jilin province and the technology hub of Shenzhen were placed under lockdowns earlier this month due to a spike in local Covid cases.