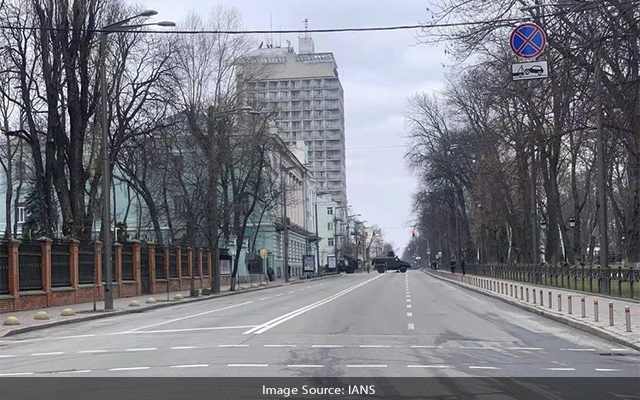 Kiev: A top Ukrainian official has claimed that Russia has amassed a large number of troops in villages and towns near Kiev, and is likely to stage an attempt to occupy the capital city in the next few days as Moscow’s military advances continue.

Speaking to the state-run Ukrainian TV on the night of Sunday March 6, Vadym Denysenko, an adviser to the Minister of the Interior, said that a key battle is expected to take place within the next few days, Ukrayinska Pravda reported.

“A fairly large amount of Russian (military) equipment and Russian troops are concentrated at the approaches to Kiev. We understand that the battle for Kiev is a key battle which will be fought in the coming days,” the adviser added.

Denysenko’s remarks on Sunday came as Russia has continued its invasion of Ukraine, with continued shelling and attacks across the country, including major cities.

Earlier in the day, a mother and her three children were killed as mortar fire hit an evacuation route from the town of Irpin, about 26 km from Kiev, which has been under heavy bombardment, the BBC reported.

In Kharkiv, the second largest city in Ukraine, one person was killed and five others were injured as Russian air strikes hit a residential building, reports Ukrayinska Pravda.

In his nightly address to the nation, President Volodymyr Zelensky in a stern warning to Russia said that Ukrainian forces “will pursue any soldier that commits war crimes in Kiev’s territory to the grave”.

“Today is Forgiveness Sunday. But we will not forgive hundreds and hundreds of victims. Thousands and thousands of sufferings. And God will not forgive. Not today. Not tomorrow. Never. And instead of forgiveness, there will be a Day of Judgment,” he said in the address posted on Facebook.

“There will be no quiet place on this earth for you, except for the grave.

“It seems everything Russian servicemen have already done is still not enough for them. Not enough ruined destinies. Mutilated lives. They want to kill even more,” he added.

Zelensky also urged Western leaders to take firmer action against Moscow, telling them the “audacity of the aggressor is a clear signal to the West that sanctions against Russia are not enough.”