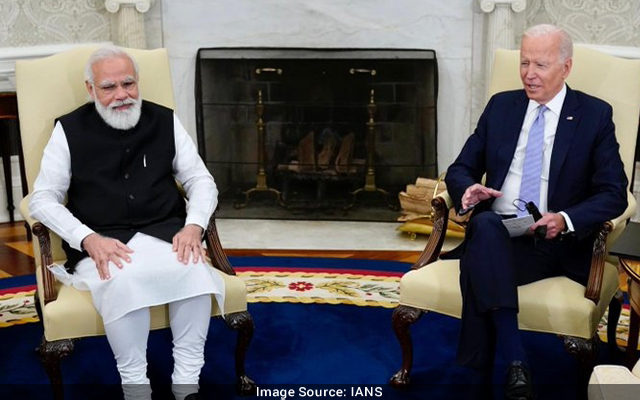 New York: “We’re launching a new chapter in the history of US-Indian ties and taking on some of the toughest challenges we face together,” President Joe Biden said on Friday as he and Prime Minister Narendra Modi began their summit in a fast-changing world throwing up problems and new issues at dizzying speeds.

After their meeting, Modi tweeted: “Had an outstanding meeting with @POTUS @JoeBiden. His leadership on critical global issues is commendable. We discussed how India and USA will further scale-up cooperation in different spheres and work together to overcome key challenges like COVID-19 and climate change.”

Speaking before the formal start of their meeting, Modi told Biden: “I find that under your leadership, the seeds have been sown for the Indo-US relations to expand, and for all democratic countries in the world, this is going to be a transformative period. I can see that very clearly.”

The shared democratic values of the two countries was a thread weaving them together.

“Democratic values, traditions to which both countries are committed, I find that importance of these traditions will only increase further,” Modi said.

Biden said: “Our partnership is more than just what we do. It’s about who we are. It’s rooted in our shared responsibility to uphold democratic values, our joint commitment to diversity.”

Both leaders spoke of the Indian diaspora, another factor that is binding the two nations together.

Modi said: “You mentioned, there are more than four million Indian Americans who are participating in the journey of progress of America. When I look at the importance of this decade, and the role that is going to be played by this talent of the Indian Americans, I find that the people-to-people talent will play a greater role and Indian talent will be a full partner in this relationship. And I see that your contribution is going to be very important in this.”

The two leaders mentioned Gandhi Jayanti that comes up next week. “As the world celebrates Mahatma Gandhi’s birthday next week, we’re all reminded that his message of nonviolence, respect, tolerance matters today maybe more than it ever has,” Biden said.

“Mahatma Gandhi always used to talk about the principle of trusteeship, trusteeship of the planet,” Modi said turning to environment, a subject dear to Biden.

“It means that the planet that we have, we have to bequeath it to the following generations, and this sentiment of trusteeship is going to assume more and more importance globally, but also between the relations between India and the United States, and it is these ideals that Mahatma Gandhi espoused,” he said. “The responsibility of global citizens is only going to go up.”

Biden referred to the Quad summit where they will be joined by Prime Ministers Yoshihide Suga of Japan and Scott Morrison of Australia, and said: “The Prime Minister and I are going to be talking today about what more we can do to fight Covid-19, take on the climate challenges that the world face, and ensure stability in the Indo-Pacific, including with our own Quad partners.”

Modi profusely thanked Biden for his efforts to continue building relations with India and recalled that their meeting in 2014 while Biden was Vice President and discussed the ties between the two countries.

He said: “You had laid out a vision for India-US relationship in great detail. And really, that was a vision that was inspirational. And today, Mr. President, as President, you are making all efforts and taking initiatives to implement that vision.”

“I see is that this is the third decade of the 21st century, this is the first year of the third decade. And I see that when I look at the entire decade, I find that under your leadership the seeds have been sown for the Indo-US relations to expand,” Modi said.