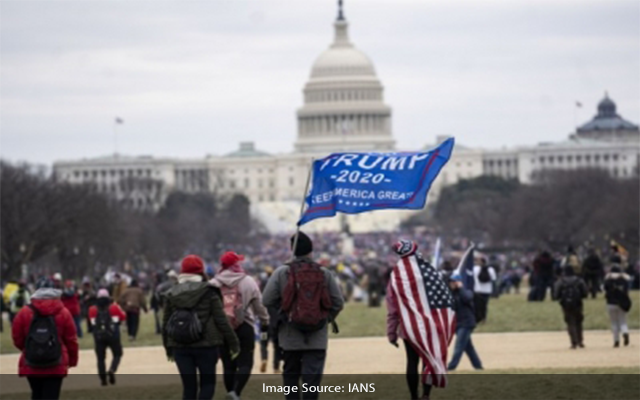 New York: US President Joe Biden has taken direct aim at his predecessor Donald Trump, accusing the latter of putting a “dagger at the throat of democracy”, while a divided nation grapples with the fallout from the January 6, 2021 Capitol riots that clearly threatened Congress.

Speaking in Washington on Thursday, the anniversary of the attack by Trump’s supporters on Congress, he called him a “defeated President” who did “nothing for hours as police were assaulted, lives at risk, the nation’s Capitol under siege”.

He pointedly refused to mention Trump’s name in his speech at the Capitol while making the most direct attack on him so far.

On ‘1/6’, as the day last year has come to be known, Trump’s supporters marched to the Capitol after attending a rally by Trump who proclaimed that he had won the election but it had been “stolen” from him and Biden was “illegitimately” being made President.

Trump’s legal challenges had already failed and even election officials from his party had refused to interfere with the election results.

As Congress was getting ready to ratify Biden’s election, the protest erupted into a riot – or, as the Democrats call it, an “insurrection” – when a section of the protesters smashed through police barriers and broke doors and windows to rampage through the Capitol where the nation’s lawmakers cowered in fear.

Although the protesters have been characterised as “White supremacists”, there were also several minorities, including some Indian-Americans, who, however, did not invade the Capitol.

While the rioters were threatening Speaker Nancy Pelosi and “literally erecting gallows” to hang Trump’s Vice President Mike Pence, the former President was watching the mayhem and did nothing, Biden said.

Attorney General Merrick Garland has laid out the theoretical framework for prosecuting Trump as an instigator of the attack that left dead in its wake at least seven people – four of them protesters of whom one was a woman shot by police, and three police officers.

He said on the eve of the anniversary: “The Justice Department remains committed to holding all January 6th perpetrators, at any level, accountable under law – whether they were present that day or were otherwise criminally responsible for the assault on our democracy.”

But reaching up to Trump would be almost impossible given the level of national polarisation, which could only make things worse.

A USA Today poll found that 58 per cent of Republicans buy Trump’s line – described by Democrats and others as “the Big Lie” – that Biden was not legitimately elected because of voter fraud.

According to the poll, two-thirds of Republicans took a lenient attitude towards the rioters saying: “They went too far, but they had a point.”

However, Republicans, Democrats and independents cut across party lines to say they are worried about the future of democracy in the US.

More worryingly, a Washington Post poll found that one in three Americans feel that “violence against the government can at times be justified”.

The 1/6 attack on the Capitol followed six months of protests against police brutality that sometimes turned violent across the country when extreme leftists and anarchists took control.

Trump had planned a news conference on Thursday but called it off – presumably sensing unease among his party legislators – and blamed it on the “total bias” of the House of Representatives committee probing the 1/6 riot and the media.

Instead, he said that he would hold a rally on January 15 in Arizona.

The House committee is made up of seven Democrats and two renegade Republicans after the party officially decided to boycott it.

The committee is calling several former officials, politicians and others connected to Trump to testify, and some have refused to appear before it or provide records.

One of those served with a subpoena is Kashyap Patel, who Trump reportedly wanted to make the head of the Central Intelligence Agency.

The panel has held Trump’s chief of staff Mark Meadows in contempt for refusing to appear before it and asked the Justice Department to prosecute him.

A tactic of some of those called by the committee is to mount legal challenges or prevaricate in other ways so that it is not able to complete its work before the mid-term elections in hopes that the Republicans gain control of the House and shut it down.

The Democrats would like to see a definitive report from the committee that they can use against the Republicans in the mediterm elections.

The panel has run through more than 300 witnesses and received tens of thousands of pages of documents that include some by Trump’s son and media personalities calling for his intervention to stop the riots.

In what may be the portents of what many Americans fear for US democracy, a Chicago University professor who is an authority of insurrections has found that most of the rioters but had the social and economic characteristics of the mainstream and were not the stereotypical extremist fringe elements portrayed by the media.

Robert Pape told a CBS News TV interviewer that over half of those arrested for breaking into the Capitol “are business owners, CEOs, from white collar occupations, doctors, lawyers, architects and accountants”.

Only 13 per cent of them were members of militias or extremist groups and “that means not nearly 90 per cent were not”, he said.

In surveys “we find that fully 21 million people believe two radical beliefs in America today: one that Joe Biden is an illegitimate president, and two that the use of force to restore Donald Trump to the presidency is justified… violence against the government can at times be justified”, Pape added.

According to the Department of Justice’s database, 740 people have been arrested in connection with the riots.

Of those arrested, 141 had admitted to mostly minor charges in what are likely deals with prosecutors for expedited trials in exchange for leniency.

Fifty-four people have been sentenced to varying terms and the longest sentence handed down by a court was five years and three months in prison for a man who threw a fire extinguisher at a police officer.