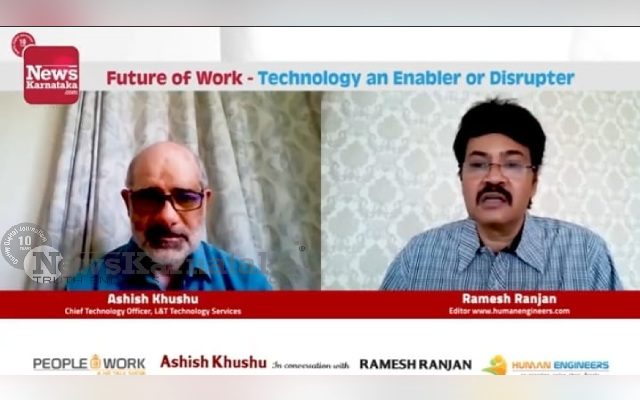 Mangaluru: The episode of News Karnataka’s definitive HR talk show, People@Work on the topic ‘Technology – An enabler or Disruptor’ was held on Sunday January 9.

Ramesh Ranjan, Editor and Founder of HumanEngineers.com, a popular HR website that deals with managing the people side of the business hosted the event.

In his introductory note Ashish Khushu mentioned, Technological intervention at a mass is the only way for the countries to rise up from below poverty line to middle class society. Talking about disruption, he added, Disruption is in the way we behave and we operate. Technology itself is brought-in in order to bring changes and so disruption in that sense is agreeable, he said denying its negative interpretation.

Voice according to me might be the next bang in technolgical evolution, he said. He also noted that there are still large number of people who are under penetrated in utilising the technology.

Answering host’s question on ‘ Will delivery through drone become a future?’ He said, Nothing substitutes social interaction. Drones indeed can become a future delivery vehicle but it has its own loopholes in management and working.

Calrifying on ‘will the technology lead to a job loss situation’ he said, jobs indeed will undergo a change. At the same time our services too will increase. It is not only IT sector which exists and other sectors too undergo development and job loss is an unacceptable reality in my perspective.

As a closure note he added, The interest towards technology will drive one towards knowing what is causing a change, why and what are the factors causing the change. That zone keeps one updated and relevant in the field, he added.

Surely world will be different in future. But the key variable is in understanding that the future is rarely the technology alone but on how humans use, perceive and adapt, said Ramesh Ranjan signing off.