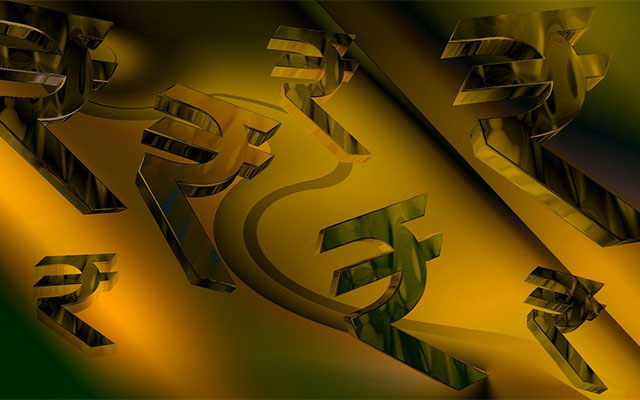 New Delhi: High commodity prices, as well as the outflow of foreign funds from equity markets, dragged the Indian rupee to a new record low against the US dollar.

Rising prices of crude oil, along with other commodities triggered by the Russia-Ukraine war, had kept weak pressure on the rupee.

The Ukraine crisis pushed Brent crude oil price to $130 a barrel on Monday. Besides, the trend is expected to trigger an inflationary trend and ultimately a reversal in monetary policy. Further, it has accelerated FIIs’ selling in the Indian equity market.

The FIIs net sold Rs 7,482.08 crore worth of equities. Consequently, the Indian rupee touched a new record low of 77 to a US dollar on Monday’s trade session.

“Rupee plunged to a record low versus the American dollar as crude oil and gold prices surged to a multi-year high. As more than 85 per cent of the country’s petroleum requirements are met by imports, rupee remains vulnerable to higher crude oil prices,” said Devarsh Vakil, Deputy Head of Retail Research, HDFC Securities.

“Higher commodity prices along with foreign fund outflows are a potent mix for the Indian currency.”

Furthermore, Vakil said that foreign institutions have pulled out around $11 billion from domestic equities this year while expected inflows from LIC IPOs are now likely to get postponed resulting in weakness in the currency.

“Looking ahead, spot USDINR is having resistance around 77.60 while the support has been seen at 76.40.”

Kshitij Purohit, Lead, Commodities and Currencies, CapitalVia Global Research, said: “We saw a positive momentum up to 77.16 levels when the USDINR Spot broke out of the Rising Channel formation.

IIFL Securities VP, Research, Anuj Gupta said: “Higher inflation, rising crude oil and commodity prices along with outflow of FIIs from the equity market are the major reasons for rupee depreciation.” “We expect it to test 77.50 to 78 levels.”