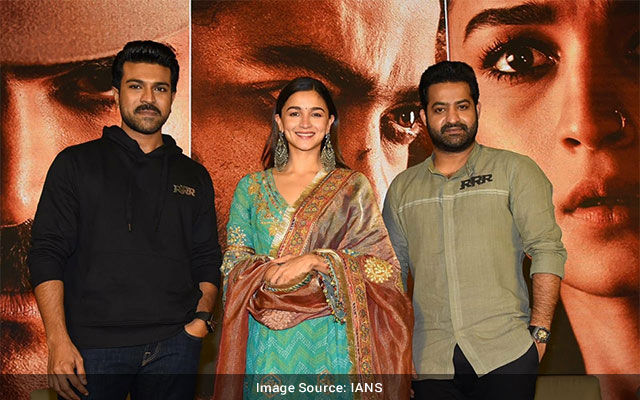 Hyderabad: Director S.S. Rajamouli’s upcoming epic ‘RRR’ has been in the limelight for quite some time and a highlight of the film is the character of Bollywood actress Alia Bhatt in a Telugu language role.

With the movie team aggressively promoting the film, the anticipation has doubled. After unveiling the visual spectacle’s trailer, director S.S. Rajamouli, along with his team are now participating in a whirlwind of promotions.

As the ‘RRR’ team addressed the Tollywood media on Saturday in Hyderabad, Alia Bhatt who was also present, shared her experience working with Rajamouli, and co-stars Ram Charan and Jr NTR.

During her interaction with the Telugu media, she impressed everyone as she spoke in Telugu. “Ela Vunnaru? ‘RRR’ trailer pagilipoindi,” started off Alia, which conveys her greetings, and her views on the trailer.

Rajamouli, who praised Alia, said that she has learned Telugu for a year and she is now very familiar with the language. Alia said, “During the lockdown, I learned to speak Telugu over Zoom calls. I couldn’t meet Rajamouli sir personally, and hence we tried to use the digital spaces to interact in the language.”

Alia heaped praises on Rajamouli for his direction and vision. Alia plays the role of Sita, the love interest of Ram Charan’s character of Alluri Sita Rama Raju.