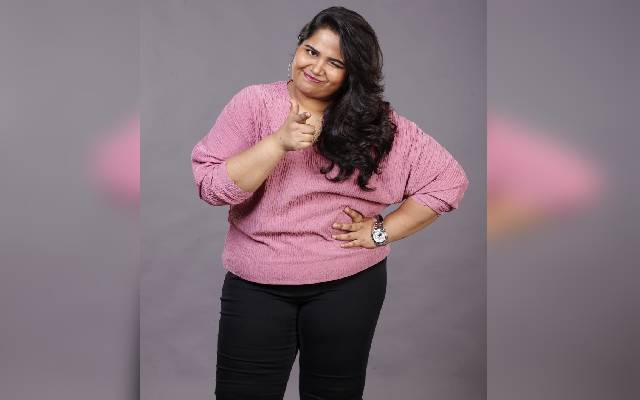 Bengaluru: Actress and stand-up comedian Sumukhi Suresh, who has come up with her new web show ‘Hum Do Teen Chaar’, says sharing screen space with children always keeps an actor on his/her toes.

The story of the comedy show revolves around a family and the narrative is shown from the lens of two children, a funny take on their daily life laced with middle-class problems.

Asked about what is so special to work with children in a comedy show, Sumukhi told IANS: “Oh! they always keep us on our toes! I think we naturally tend to adore children watching them on-screen, they are funny, and spontaneous and they could just take away everything from a scene. So as actors, whether it’s me and Biswa, we were all the more prepared, well-rehearsed so that we can deliver the best performance.”

The show is written by Biswa Kalyan Rath, who is also playing the male protagonist.

Earlier, Sumukhi has written and acted in the award-winning web series ‘Pushpavalli’. This was one of those projects in which she was only involved in acting just based on the given script.

She explained how performing on material that is written by another writer is also quite challenging for her. Sumukhi said, “Earlier what used to happen, since I wrote Pushpavalli Parsuraman, I exactly know how I saw the character. Here, it is more challenging to execute the vision of a writer through my performance.”

“My character Bindu is a police constable dealing with all the middle-class problems. The chances were that Bindu could scream in her interaction with people, but our director Karan told me to play her as someone who dealt with regular madness so much that she is not angry anymore, but tired! So I was putting the element of resistance into the performance. It was challenging yet enjoyable as a performer,” she shared.

Directed by Karan Asrani and produced by Vikram Singh and Rachita Arya, ‘Hum Do Teen Chaar’ released on Amazon miniTV on March 29.