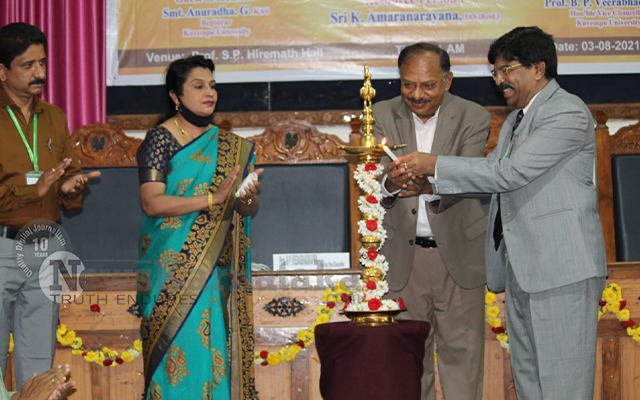 Shivamogga: “A traditional way in managing the environmental pollution is still in practice. This waste has stood up as a greater challenge surpassing man’s thought and so, there is an emergency for creative waste management projects,” said retired IAS officer K Amaranarayan.

He was speaking at the special session on environment pollution organised by Environmental Science Department of Kuvempu University at P. Hiremath Hall here on Tuesday August 3. “Unorganised sector manages most of the E – wastes produced in India. There is a need to concentrate on Human health and environmental impacts in processing the E- wastes. Government policy makers have to introspect seriously on this matter,” he said.

In order to balance the environment and control pollution, the use of electrical cars, solar energy, wind energy and such non-traditional method of power production should be focused. Rainwater harvesting, green environment and such other schemes and programmes have to be continued under the co-ordination of Department of Forest, Environment Department and Pollution Control Board, he added.

B. P. Veerabhadrappa, Vice Chancellor of the University said, “Kuvempu University is following environment-friendly programmes like rainwater harvesting, street lights from solar energy and waste management. There are also plans to introduce cycles in colleges campus as an initiative towards reduction of fuel consumption and controlling pollution,” he added.