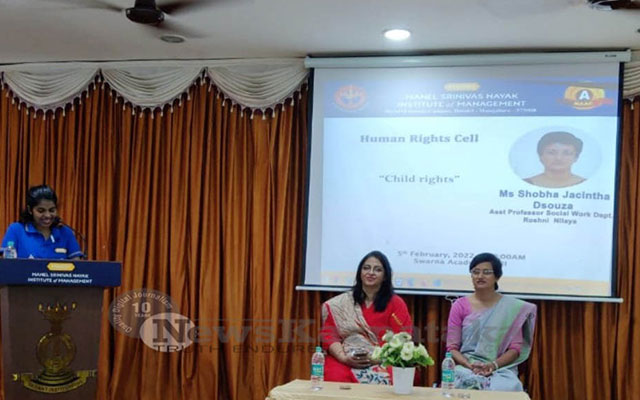 Mangaluru: The Human Rights Cell of Manel Srinivas Nayak Institute of Management (MSNIM) hosted a workshop for its 22nd and 23rd batch students on the topic “Child Rights” on Saturday, 5th February, 2022 at the institute campus at Bondel, Mangaluru. Shobha Jacintha D’Souza, Assistant Professor, Department of Social Work at School of Social Work, Roshni Nilaya, Mangaluru was the resource person for the workshop. Large number of MBA students and staff participated in the event.

In her talk, Shobha Jacintha D’Souza explained to the students about the basic rights of a child. “Suppression of human will leads to competition among the youth. Every human being is unique and precious in their own way,” she said. Illustrating her talk with case studies where child rights were not observed, resulting in child abuse, lack of basic education etc., Shobha informed the students about what they can do to help in such situations and the remedial measures to follow when they witness such cases. One of the students was made to call the Child Helpline toll free number 1098 for a quick training session on what a student can do in case of such child maltreatment cases.

Shobha Jacintha D’Souza animated her workshop with activity-based learning whereby the students were able to understand important concepts relating to child rights. The game of the lion and sheep was conducted to illustrate how the innocent children are like sheep and the child abusers are like the lion which prowls on the sheep. In this activity, it was shown that the more the people who joined hands to protect the sheep, the safer the sheep was and the lion’s attempts were failing. “If we all join hands together and take correct timely actions toward child abuse cases, we can bring a real change and save large numbers of children from misery and give them a happy life,” she said while concluding this game.

Institute Director Dr Molly S. Chaudhuri was present on the occasion. Sonia Philip D’Souza and Preema Lasrado anchored the programme. Avishma Alva B. gave a vote of thanks. Nanditha Sunil, a faculty member of the institute, was the coordinator of the workshop.