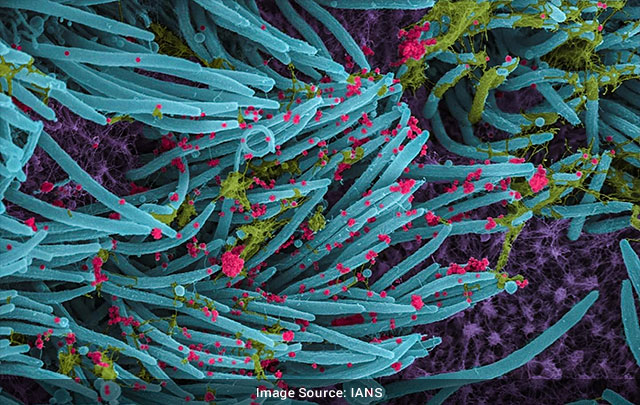 New Delhi: Lambda has now gone globetrotting. According to a recent World Health Organisation (WHO) report, it has been found in 29 countries, writes Tara Hurst, Lecturer, Biomedical Science, Birmingham City University in The Conversation.

The report states: “Lambda has been associated with substantive rates of community transmission in multiple countries, with rising prevalence over time concurrent with increased Covid-19 incidence.”

On June 14, the WHO declared lambda a “global variant of interest”. Public Health England followed suit on June 23, designating it a “variant under investigation” because of its “international expansion and several notable mutations”.

Of the eight confirmed cases of lambda in the UK, most have been linked to overseas travel.

Hurst writes that Peru currently has the highest number of Covid-19 deaths per capita. Of every 100,000 of the population, 596 have died of coronavirus.

Hurst says that one of the main reasons for the high number is due to the emergence of the lambda variant, which currently accounts for 97 per cent of cases in Peru.

Hurst adds that the variant contains many mutations, which could increase transmissibility and severity, reduce susceptibility to vaccines and confound diagnostics. It remains a variant of interest rather than a variant of concern, Hurst adds.

A preprint from the New York University Grossman School of Medicine looked at the effect of the Pfizer and Moderna vaccines against the lambda variant and found a two-to-threefold reduction in vaccine-elicited antibodies compared with the original virus. In the scheme of things, this is not a massive loss of neutralising antibodies. The researchers conclude that these mRNA vaccines will probably remain protective against the lambda variant.

Hurst says researchers from the University of Chile investigated the effect of the Sinovac (also known as “CoronaVac”) vaccine against the lambda variant. They also found a threefold reduction in neutralising antibodies compared with the original variant.

Hurst adds the fact that these two studies found that neutralisation is at least partially retained is promising, not least because this is only one facet of the immune response elicited by vaccination.

According to PHE’s latest “risk assessment” (July 8) of lambda, there is no evidence of a country where lambda has outcompeted delta. Studies are ongoing, but for now, lambda remains a variant of interest rather than a variant of concern.