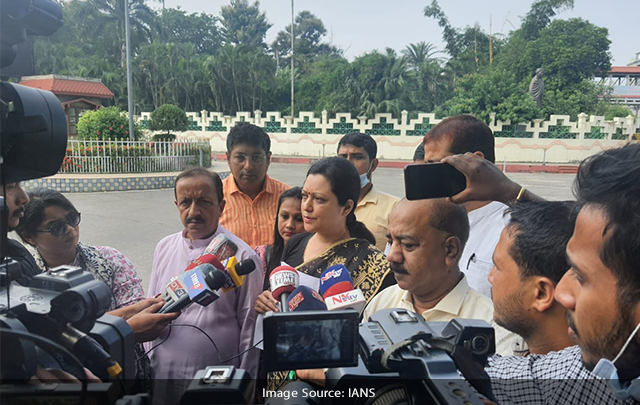 Guwahati: The Congress has lodged a complaint with the Election Commission claiming that Assam Chief Minister Himanta Biswa Sarma had blatantly violated the model code of conduct before the October 30 by-elections to five Assembly seats by announcing a series of new welfare schemes.

An Election Commission official on Sunday October 24 said that they are examining the accusations.

Congress state President Bhupen Kumar Borah, in a letter to the CEO, said that Sarma had made a number of new announcements for the 40 tea gardens of Mariani, with a package of Rs. 1 crore for each garden, thus promising Rs. 40 crore to develop the connecting roads to the gardens.

He said that the Chief Minister also promised to incorporate each tea garden into the Jal Jivan Mission, 10 new high schools in the gardens, financial assistance to self-help groups of the women tea workers, and inclusion of casual labourers in the tea gardens under the MGNREGA scheme.

Sarma also made announcements to set up a medical college in Thawra Assembly seat and also to build two bridges over the rivers in the constituency in violation of model code of conduct, the complaint said.

“The Chief Minister also announced that if any sitting opposition MLA joins the BJP he will give Rs. 2,000 crore worth development projects in his constituency. This is a shocking violation of the tenets of the Constitution of India. Every MLA, whether in ruling or opposition, is entitled to get his development fund,” Borah said in his letter.

The by-elections on October 30 in Gossaigaon, Tamulpur, Mariani, Thowra and Bhabanipur were necessitated by the Covid-related deaths of two sitting MLAs belonging to United People’s Party Liberal and Bodoland Peoples Front, while two Congress and one All India United Democratic Front legislators joined the ruling BJP after quitting the Assembly.