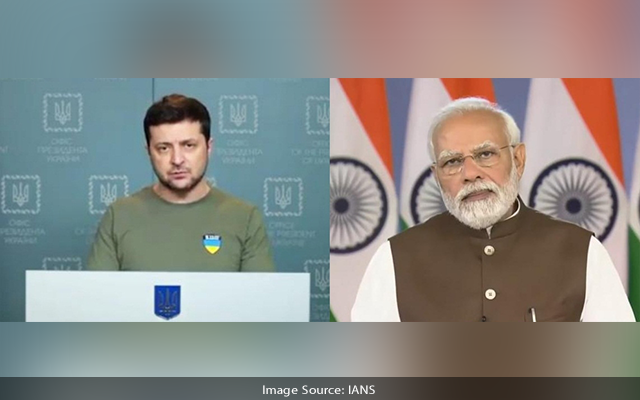 New Delhi: Prime Minister Narendra Modi is likely to speak to Ukrainian President Volodymyr Zelensky on the afternoon of Monday March 7 as Russia’s war on Kiev has continued for the 12th day, government sources said here.

Modi’s interaction with Zelensky, the second since the Russian invasion began on February 24, will take place amid India’s all out efforts to evacuate its nationals, mostly students, from the war-torn nation.

The Prime Minister had spoken to the Ukrainian leader for the first time on February 26.

According to the sources, Modi is expected to seek a safe passage for Indian students stuck in the cities of Sumy and Odessa during the call on Monday.

Since the war began, Modi has also spoken to Russian President Vladimir Putin twice during which he urged the latter to give a safe passage to Indian nationals from Kharkiv, Sumy and Odessa.

Meanwhile, India has continued sending relief material to the war-torn nation as part of humanitarian assistance via Indian Air Force (IAF) aircraft which are deployed for the evacuations of stranded Indians.

On Sunday, the Ministry of Information and Broadcasting shared a video of the relief materials being loaded in an IAF aircraft by the National Disaster Response Force (NDRF) personnel. These supplies are being sent to Poland from where it would be moved to Ukraine.

According to the Ministry of External Affairs, India has sent two trenches of humanitarian assistance that included medicines, medical equipment and relief materials, via IAF aircraft. While one flight carried six tonnes of material to Romania, and the second carried nine tonnes of material to Slovakia on March 3.

On March 2 however, India had again abstained from a vote on Ukraine at the UN General Assembly “in view the totality of the evolving situation.”

This was the fourth abstention by New Delhi on a vote on the Ukraine issue at the UN – the other three at the Security Council where India is an elected member.