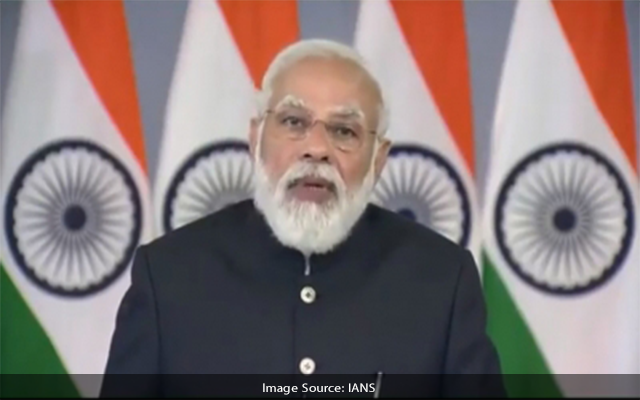 The Prime Minister on Friday hosted a Sikh delegation at his official residence at 7 Lok Kalyan Marg, here.

The group included people from different walks of life. Union Minister Hardeep Singh Puri was among those present on the occasion.

Reiterating his appreciation for the mood of ‘New India’, the Prime Minister said: “New India is scaling new dimensions and is leaving its mark on the whole world. The period of Corona epidemic is the biggest example of this. At the beginning of the epidemic, people with an old mind-set were expressing concerns about India. But now, people are giving the example of India for its handling of the pandemic.”

“Earlier, concerns were being voiced over the enormity of the population of India and many were doubtful about vaccines for Indians. But today, India has emerged as the biggest vaccine maker. You will also be proud to hear that 99 per cent of the vaccination has been done through our own ‘Made in India’ vaccines,” he said.

The Prime Minister noted in this difficult period, India has emerged as one of the world’s largest start-up eco-systems.

“The number of our unicorns is constantly increasing. This growing stature and credibility of India provides maximum satisfaction and pride to our diaspora,” he said.

Talking about the Indian diaspora, Modi said: “I have always considered our Indian diaspora as Rashtrdoot of India. All of you are the strong voice and lofty identity of Maa Bharati abroad.Even diaspora feels proud about the strides of growth that India is taking. Wherever we are in the world, ‘India First’ needs to be our primary faith.”

On the occasion, the Prime Minister recalled his long association with the Sikh community.

“Going to Gurdwaras, spending time in ‘sewa’, getting langar, staying at the homes of Sikh families has been a part of my life. The feet of Sikh saints keep falling from time to time in the Prime Minister’s residence here. I keep getting the good fortune of their company,” Modi said.The Prime Minister also recalled his visits to the places of Sikh heritage all over the world during his visits abroad.

“Our Gurus have taught us courage and service. The people of India have gone to different parts of the world without any resources and achieved success through their labour. This is the spirit of New India today too,” he said.

Bowing to the great contribution and sacrifices of the Sikh Gurus, the Prime Minister recalled how Guru Nanak Dev ji awakened the consciousness of the entire nation and brought the nation out of darkness and took it on the path of light.

“The Gurus travelled all over India and everywhere there are their signs and inspirations. They are revered and there is faith in them everywhere. The feet of Gurus sanctified this great land and inspired its people. Sikh tradition is a living tradition of ‘Ek Bharat Shreshtha Bharat’,” the Prime Minister said.

Prime Minister Narendra Modi expressed the county’s gratitude for Sikh Community’s contribution during the freedom struggle and after Independence. He said the “Sikh community is synonymous with the courage, prowess and hard work of the country”.