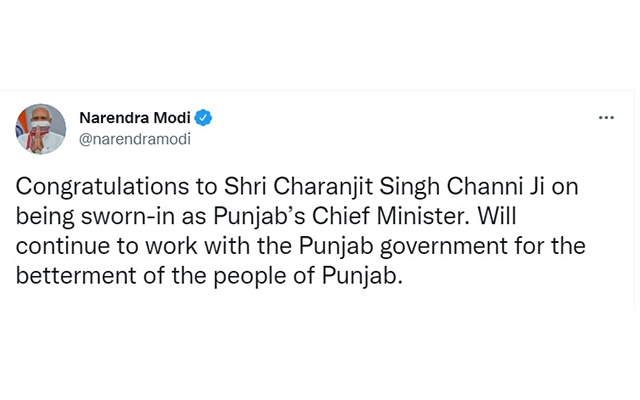 “Congratulations to Shri Charanjit Singh Channi Ji on being sworn-in as Punjab’s Chief Minister. Will continue to work with the Punjab government for the betterment of the people of Punjab,” Modi tweeted.

Channi took oath of office along with his two deputies — one a Jat Sikh and another belonging to the Hindu community — at a simple ceremony here in the Punjab capital that was delayed for 20 minutes owing to the late arrival of party leader Rahul Gandhi.

Three-time legislator from the Chamkaur Sahib assembly constituency in Rupnagar district, Channi had joined the Congress in 2012 and was holding the portfolios of Technical Education, Industrial Training, Employment Generation and Tourism and Cultural Affairs in the outgoing Amarinder Singh Cabinet.