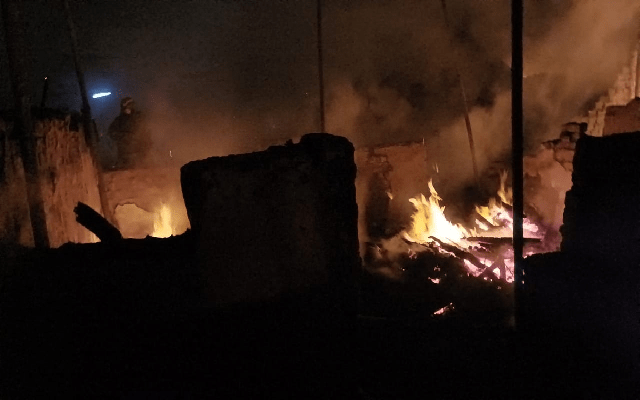 New Delhi: As many as seven people, including an 11-year-old child, were charred to death in a major fire that broke out at Gokalpuri village of the national capital, an official said on Saturday March 12.

The official informed that they received a call about the fire incident around 1.00 a.m. near pillar no 12, Gokalpuri village in north east Delhi after which as many as 13 fire tenders were immediately pressed into the service.

“Seven charred bodies have been recovered from the huts,” Delhi Fire Service chief Atul Garg told IANS, adding that the fire was in around over 60 huts.

The cause of the fire was yet to be ascertained and the inferno was brought under control in four hours around 3.45 a.m.

“The police immediately rushed to the spot with all the rescue equipment. We also contacted the fire department which responded very well and with their help we were able to douse the fire by 4 a.m.,” he said.

He further said that in the incident at least 30 shanties were reduced to ashes along with their belongings and seven lives have been lost.”Food and shelter arrangements are being made for the evacuees,” the official said.

Meanwhile, Chief Minister Arvind Kejriwal expressed grief over the incident. “Heard the sad news early in the morning. I will go to the spot and meet the affected people personally,” the Chief Minister wrote on Twitter.

Notably, this major incident, the biggest so far in 2022 in terms of casualties, comes just four days after a fire broke out at a plastic factory in outer Delhi’s Bawana area. No injuries or casualties were reported then.