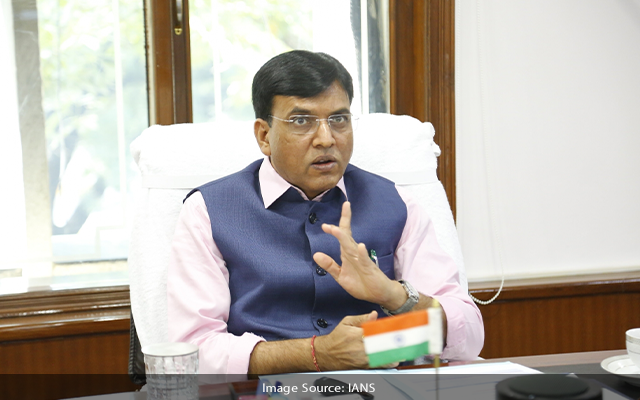 New Delhi: Noting that management of fertiliser requirements of the farmers and agriculture sector was the collective responsibility of the Centre and the states, Union Minister of Chemicals and Fertilizer, Mansukh Mandaviya on Tuesday November 23 assured, “There is ample production of fertiliser and no shortage across the country.”

He also warned the states to monitor pilferage to non-agriculture usage.

Virtually reviewing the status of fertilizer availability across the country with State Agriculture ministers, Mandaviya informed the State ministers of the ‘Fertiliser Dashboard’ that has been operational since the past about two months, and also about the ‘Control Room’, which has been working 24X7 for effective coordination between the states and the Centre.

“This was done to ensure adequate fertiliser availability in various districts. I urge the states to monitor requirement/supply on a daily basis on the ‘Fertiliser Dashboard’ for more effective and productive fertiliser management,” the Union Minister told the meeting attended by Agriculture Ministers from 18 states, a release from the Ministry said.

Mandaviya expressed gratitude towards the states for collaborative efforts during the past few months to tide over the enhanced demand from farmers for DAP.

The state Agriculture Ministers thanked the Union Minister for fulfilling their fertiliser requirement during the past few months when demand for DAP had risen across many states, the release said.

“It is important to plan in advance and assess the district wise requirement on a weekly basis. There is ample quantity of balance and unutilised fertiliser in various districts. Daily regular monitoring will inform us in advance for better management. The Centre has been supplying fertiliser to the states without any delay based on the requirement indicated by them,” he stated.

The Union Minister also warned that it is important for the states to aggressively prevent any diversion of Urea to industry (such as veneer, plywood etc.) to ensure adequate availability for the agriculture sector. He informed that as a result of aggressive and effective monitoring by the State Administration, movement of fertiliser across the borders from Uttar Pradesh and Bihar has been prevented.

“It is important for states to monitor that supply to farmers is not diverted to other sectors, thereby leading to false shortage,” he exhorted the states.

He also urged the states for enhancing awareness and motivating the farmers for judicious use of fertiliser and reduction of wastage and misuse.