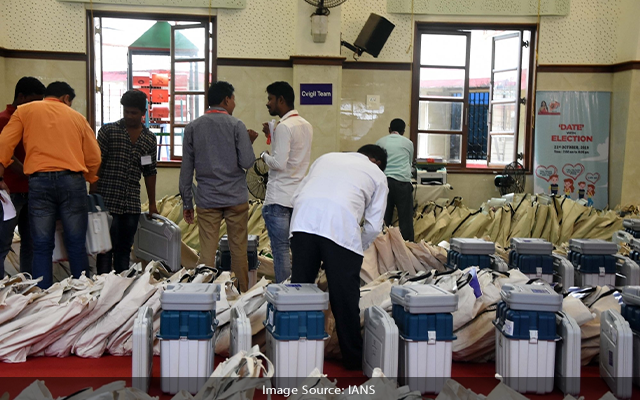 Panaji: Counting of votes polled in the February 14 elections in Goa got underway here, a process which will decide the fate of 301 candidates who are vying for 40 Assembly seats in the State.

According to Chief Electoral Officer Kunal, counting of votes locked in electronic voting machines (EVMs) would be taken after counting of service votes and absentee ballots.

“We have given training to all counting personnel and our observers have also come from the Election Commission of India for all constituencies. We are hopeful that our counting process will be over by 10.30 am to 11.00 am. After that VVPAT mandatory counting will be taken up,” he added.

Nearly 79 per cent voters cast ballot in the February 14 polls in Goa.

Exit polls have tipped a keen contest between the ruling BJP and the Congress and Goa Forward alliance, with neither being able to reach the magic figure of 21 in a 40-member State Assembly.

Both parties have been actively wooing other smaller political parties as well as independent candidates.

The regional outfit Maharashtrawadi Gomantak Party (MGP) could play the role of a kingmaker, with exit pollsters suggesting that the support of the party which is in a pre-poll alliance with the Trinamool Congress, could be critical to the government formation.

Apart from the four named parties, the Aam Aadmi Party and Revolutionary Goans, another regional party, is also in the fray.

See also  Will approach ICG to crack down on LED fishing: Goa Minister