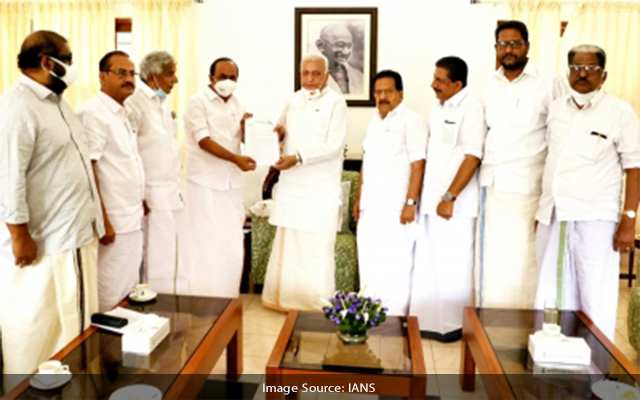 Thiruvananthapuram: The top leaders of the Congress led Opposition in Kerala on Thursday January 27 called on State Governor Arif Mohammed Khan and requested him not to give his assent to the Kerala Lokayukta (amendment) ordinance 2021.

Apparently, the amendment to the Ordinance was cleared by the Pinarayi Vijayan cabinet, last Wednesday, when he appeared online from his hospital bed in the US taking away all its powers and leaving it a mere recommendatory body and following that the Congress opposition has been up in arms and have said this is being done as Vijayan and his cabinet colleague State Higher Education Minister R. Bindhu are facing serious charges before the Kerala Lokayukta. The amendment was sought sensing trouble for the two, they alleged.

In 2021 April, soon after the Assembly elections, the Kerala Lokayukta ruled that the then State Higher Education Minister K.T. Jaleel had violated his oath of office and had appointed his relative following which Jaleel had to quit and this is what the Vijayan government fears in the light of two cases before the Lokayukta.

After the meeting V.D. Satheesan, the leader of opposition, said the Governor gave them a patient hearing.

“We told him that he should not give his assent to it and also pointed out that it was the Left government headed by E.K. Nayanar in 1999 who framed the Lokayukta and at that point all the details in it was discussed and debated in the Kerala Assembly then and cleared. Who doesn’t know that this tweaking is taking place to save Vijayan and his cabinet colleague currently caught in a mess due to their own doing,” said Satheesan.

“We also told him since in 1999 the Lokayukta Bill was given to the President to get his assent, the amendment also should be sent to the President. We are of the firm view that if there is a proper legal scrutiny done, this amendment will not go through and he will not be able to put his signature,” added Satheesan.

What has come as a shocker for the Vijayan government is that the CPI, the second biggest constituent of the Left Democratic Front had criticised the move of sending an ordinance to the Governor seeking his approval for the amendment of the state Lokayukta Act.

CPI state secretary Kanam Rajendran said the move is being strongly opposed because there was no need to bring it out as an Ordinance when the Assembly session is slated to be held soon and it could have been easily brought as a Bill, besides no discussion took place in the political front also.

Now all eyes are on Khan and on Vijayan slated to arrive from the US on Saturday, on what they have to say on this.