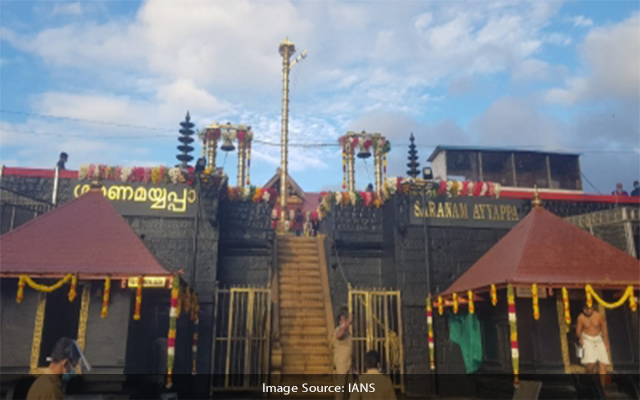 Thiruvananthapuram:  The Kerala government on Saturday December 11 gave the green signal for all Sabarimala pilgrims to take a holy dip before going uphill for darshan of Lord Ayyappa at the Sabarimala temple from Sunday.

The two-month long temple season that began on November 16 will end in the third week of January 2022 with a few days break in the last week of December.

Until now, this season, the holy dip was not permitted and there were various restrictions but since the season began, the relaxations are being eased with another directive that came on Saturday that pilgrims can now take any route they wish. Till now only one route was open.

All these restrictions were eased after the state Devasom Minister, K. Radhakrishnan held talks with Chief Minister Pinarayi Vijayan.

Pilgrims can now remain at the temple hilltop for 12 hours and rooms will also be given to the needy.

Earlier this week, the ‘tantri’ of the temple, Kantarar Mahesh Mohanaru expressed the hope that things will soon fall in place so that all traditional rituals at the temple take place.

This season it has been decided to limit the daily number of devotees to a maximum of 30,000 which should be either pre-booked or must get a spot booking for which counters have been opened.

According to the temple authorities, by now more than 1.6 million pilgrims have pre-booked their temple visit.

The Kerala government has come out with a fresh directive exempting all children below 10 years from a Covid test (RT-PCR) to visit the temple.

The directive, however, said that the adults accompanying the children should ensure that the latter follow Covid protocols and must wear a mask, carry a sanitiser and ensure that social distancing is maintained.

The order said that the adults are accountable for the children’s health issues.

Pilgrims above 10 years must either carry a negative RT-PCR test report taken prior to 72 hours or must have taken both the vaccine jabs.

The Sabarimala temple, which is the biggest earner for the Travancore Devasom Board that runs this temple and other temples in the south Kerala districts, for a few years since 2018 has had a troubled festival season.

While the previous season was badly affected by Covid-19, this time, after the season opened, more than Rs 22 crore has come by way of offerings and sale of “appom” and “aravana” (payasem) as the “prasad”.