Patna: After Lord Rama faced charges of domestic violence, his supreme servant, Lord Hanuman has been pulled up, allegedly for encroaching government land.

Bizarre but true, a legal notice has been issued by Begusarai district administration to Lord Hanuman asking him to “voluntarily vacate the encroached government land” or he will be personally responsible for any damage caused to the temple while carrying out anti-encroachment drive.

A railway flyover has been planned in the area and the Hanuman temple, in front of the Lohianagar Ayurveda College in Begusarai, is causing hindrance to the construction of the bridge. Therefore, the circle officer Niranjan Kumar Singh has issued notices to all those who have encroached upon the government land.

The notice (No 274, dated Feb 5), issued by the circle officer (CO) of Begusarai, has given an ultimatum to Lord Hanuman to vacate the land within 48 hours or else the district administration will forcibly evict him.

Further, the notice reads that the charges for removal of the encroachment from the temple premises will have to be  borne by him!
With this, the saffron activists are up in arms against the administration. 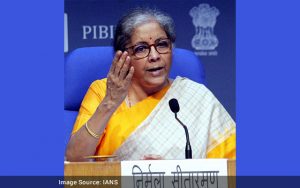