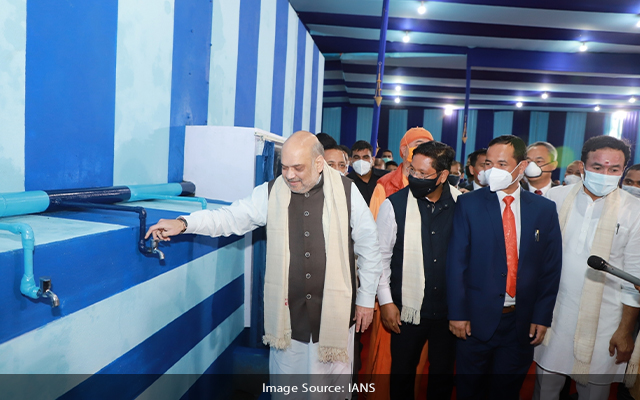 Shillong: Union Home Minister Amit Shah said on Sunday that Prime Minister Narendra Modi has set the target of providing pure drinking water to every household in the country before the completion of 75 years of Independence.

Shah said that Modi has set the target of providing pure drinking water to every household in Meghalaya on the occasion of 50 years of the northeastern state. “If the source of water is not pure then people will not be healthy,” the Home Minister said after inaugurating the Greater Sohra Water Project on the second day of his two-day visit to Meghalaya.

The Rs 25 crore project was jointly launched by the Jal Jeevan Mission, the Ministry of Development of North Eastern Region (DoNER) and the Government of Meghalaya under the North-East Special Infrastructure Scheme to provide pure drinking water through taps to every household of the mountainous state.

Shah said that there is an ambitious programme to provide drinking water to 2,80,000 families in the state of Meghalaya, which is clubbed into 1,874 small projects. He said that the task of delivering such an ambitious project in this remote area is extremely important and challenging. The Union Home Minister later garlanded the statue of Swami Vivekananda at Ramakrishna Mission in Sohra and participated in the prayers programme.