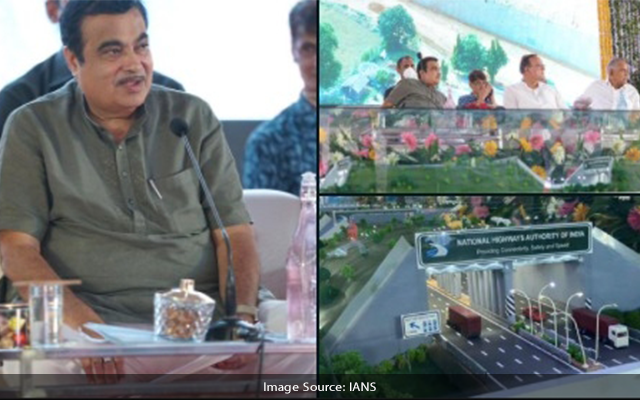 Jaipur: Union Minister Nitin Gadkari, who was in Rajasthan on Thursday September 16 to review the progress of Mumbai-Delhi Expressway, announced that distance between Jaipur and Delhi will soon be completed in just two hours.

In his two media interactions at Dausa and Bundi, he said, “Plans are afoot to make Delhi-Jaipur e-highway too. This is my dream project and talks are going on. Electric vehicles shall run on this highway saving money and checking pollution.”

In Rajasthan, 374 km of road is to be constructed under this expressway at a cost of Rs 16,600 crore, for which the work has been awarded. This expressway will strengthen the development in the districts of Alwar, Bharatpur, Dausa, Sawai Madhopur, Tonk, Bundi and Kota, he said adding that it will also bring in socio-economic transformation by developing farmers, tribals and youngsters.

Gadkari further said that the part of the expressway originating from Ranthambore and Mukundara Hills Tiger Reserve will be made like an elevated corridor, so that the animals living in the sanctuary do not face any kind of problem.

The Delhi-Mumbai Expressway, which is 1,350 km long, is being built under the Bharat Mala project. Rs 90,000 crore will be spent on it. The project is targeted to be completed by January 2023. This expressway will pass through 5 states of the country — Delhi, Haryana, Rajasthan, Gujarat and Maharashtra.

Gadkari further said, “We will try that traffic rules can be changed for this highway and maximum speed around 100 km per hour be allowed as the road will have no animals or men walking on it,” he added.

We will also ensure that distance between Delhi and Amritsar is covered in four hours, Delhi to Katra in six hours, Delhi to Mumbai in 12 hours and so on, Gadkari said further.

Mumbai-Delhi Expressway will be the longest expressway which will be equipped with many facilities. There shall be electric charging facilities, also we have plans to showcase Rajasthan handloom and food, he said adding, that if the government here can plan logistics, industrial cluster, smart city etc, the youths here can get ample opportunities too.