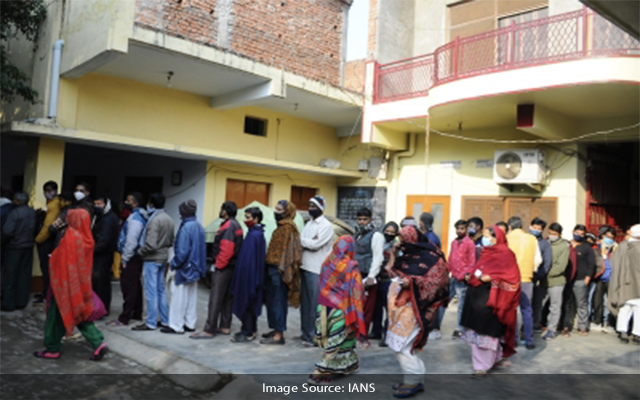 Lucknow: Polling has begun for the seventh and final phase of Assembly elections in Uttar Pradesh.

This phase will bring the curtain down on one of the most fiercely contested elections in the State.

The counting for all the phases will be done on March 10.

A total of 613 candidates will be trying their luck in this phase on the 54 seats which include 11 reserved for the Scheduled Castes and two for the Scheduled Tribes by an electorate consisting around 2.06 crores.

The final round will also be a test of the alliances carved by both the BJP and Samajwadi Party with small caste-based parties.

Once considered a stronghold of the Samajwadi Party, the region saw BJP making inroads in 2017 by winning 29 seats along with its allies Apna Dal (4) and SBSP (3).

The BSP had got six seats and Samajwadi Party 11 seats.

Dara Singh Chauhan who had resigned from the Yogi Adityanath cabinet and joined the Samajwadi Party is also in contesting from Ghosi in Mau.

The BJP is going all out to retain its bastion while the Samajwadi Party is eyeing to regain the constituencies it won in the 2012 Assembly elections.

Also, the seventh and last phase of UP assembly elections will be a litmus test for allies on both the sides– from Anupriya Patel in BJP-led alliance to Om Prakash Rajbhar in the SP-led alliance.

In this election, BJP has fielded 48 candidates out of 54 seats on the party symbol while its ally Apna Dal (S) and Nishad Party have fielded 3-3 candidates each.