Lucknow: The Suheldev Bhartiya Samaj Party (SBSP), an ally of the Samajwadi Party (SP) in Uttar Pradesh, stayed away from a meeting addressed by joint opposition Presidential candidate Yashwant Sinha, here on Thursday.

Sinha, who is on a campaign trail, arrived in Lucknow on Thursday evening.

An spokesman of the SBSP, which has six MLAs, said that the party had no information about any meeting. However, Rashtriya Lok Dal (RLD) President Jayant Chaudhary was present in the meeting.

While addressing the opposition MLAs, Sinha explained the circumstances prevailing in the country, and said that if elected, his allegiance would be to the Constitution alone.

Sinha said that though Presidential poll has been held several times, the situation is different this time because a sharp demarcation has taken place. 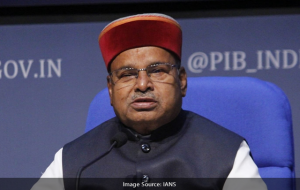