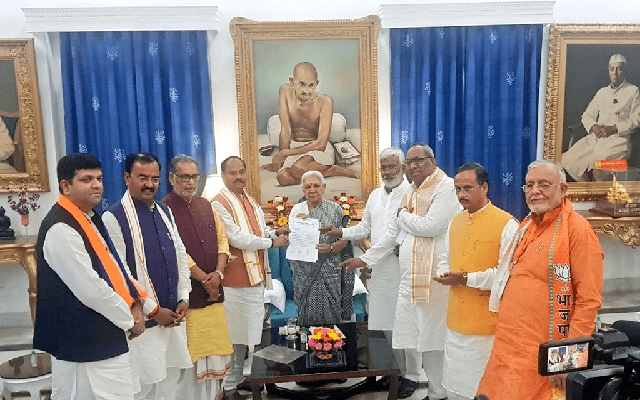 Lucknow: The BJP has staked claim to form the new government in Uttar Pradesh after Yogi Adityanath was on Thursday March 24 unanimously elected as the leader of BJP’s legislative party.

BJP leaders Swatantra Dev Singh, Raghubar Das and others drove to Governor’s house on Thursday evening after the legislative party meeting, where Adityanath was elected the leader.

A proposal to this effect was put forward by senior BJP MLA Suresh Khanna, which was approved by all the legislators.

UP Governor Anandiben Patel has invited Adityanath to form the government.

Accordingly, Adityanath will be sworn-in as the Chief Minister for the second consecutive term on Friday evening.

Union Home Minister Amit Shah, who had been nominated as an observer for Uttar Pradesh, was present at the party meeting along with co-observer and former Chief Minister of Jharkhand, Raghubar Das.

Addressing the legislators, Shah said that the BJP has created history by returning to power in the state with a majority.

“This is an endorsement of Prime Minister Narendra Modi’s vision and guidance, and Yogi Adityanath’s competence. The BJP has brought political stability to UP and given a sense of security to its people,” he said.

Shah further said that the people of UP have elected Adityanath as the Chief Minister and “we have simply elected him as the leader of the legislative party”.

Speaking on the occasion, Adityanath thanked Modi, Shah, Raghubar Das and the party leadership for his election as the leader of BJP’s legislative party.

He said that it is the first time in recent history that a sitting Chief Minister has been asked to continue for a second consecutive term.

Adityanath spoke at length about the achievements of his government in the first term, and attributed its success to the vision of the Prime Minister.

Adityanath further said that despite a misinformation campaign, the BJP has returned to power in UP with an overwhelming majority under the guidance of Modi.

The legislative party meeting, which was earlier scheduled to begin at 4 p.m., was delayed by almost an hour-and-a-half as Shah, Das, Adityanath and other leaders held another meeting at the BJP state headquarters to iron out the irritants in ministry formation.

According to sources, a major bone of contention is the inclusion of Keshav Maurya as the Deputy CM. Though Maurya lost the elections, his lobby is insistent on his continuing in the post.

His supporters are citing the example of Uttarakhand Chief Minister Pushkar Singh Dhami, who has been made the CM despite losing the elections.