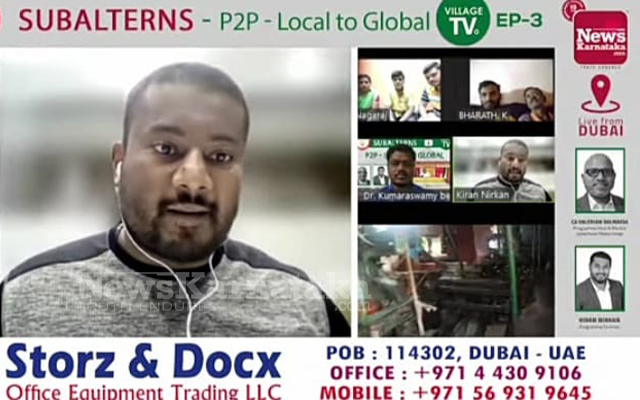 Dubai: Village TV Trust, Mangaluru and Loyola College, Bengaluru held a special support programme ‘Subalterns’ on YouTube on September 24 at 6.30 pm., which is powered by newskarnataka.com.

The programme was hosted by Kiran Nirkan. The weekly programme is conducted in the Kannada language.

In the beginning Programme host Kiran Nirkan explaining the motto of starting ‘Subaltern’ said, “the new series has been started with an intention to provide a voice to the voiceless people, who belong to the marginalised communities of the society. As a part of the decennial celebrations of NewsKarnataka, we have undertaken this initiative.”

When asked about the daily routine of Nagaraj, weaver by profession and father of  Harshavardhan N. said, “Our day starts around 7.00 am when we go to the factory. We will return around 9:30 pm. From the past 40 years, I have been working as a weaver as I continued my father’s profession.

“Weaving looks easy but it is difficult to work. If we do any minor mistake we won’t get paid any wages. I do not want my son to continue the same profession as we do not get paid enough,” he expressed.

Sharing his experience over these years he said the weaving profession also has undergone some transitions. The handlooms are replaced by power looms, due to shortage of workers, he mentioned.

Padmavathi wife of Nagaraj said she also joins her husband in weaving after finishing her household works.

Kumar R., a weaver and parent of Bharath K. said, “I am a daily wages labourer working in a weaving factory. We buy the materials from the middlemen so we have to sell the final products to them. They pay us nearly Rs. 350 rupees for a saree. In a single day, we can weave a maximum of one and half saree.”

“The saree which we produce will be sold at Rs. 3000 in the market.  After deducting all the expenditure we get approximately Rs. 300 to 350 only,” he said.

“Amid Covid – 19 induced lockdown we were forced to shut the factory. We did not have any work for many months. I had no other source of income, So my son Kumar worked hard and earned some money which helped us to survive. Even after the unlock our conditions are no better,” he expressed.

Bharat said he has interest in rapping and singing.

Speaking further Nagaraj said, “The lockdown has added more difficulties as we are not getting enough price for sarees. On the other hand, the prices of essentials, LPG, Petrol has been skyrocketing. We don’t get any financial help or benefits from Government,” he expressed.

“We get orders from the shopowners, according to it we buy materials and weave sarees. We get a minimum price of not more than Rs. 300 per saree.”

When asked about the Government assistance and insurances provided to the weavers he said, “We don’t get any kind of help from the government from any schemes. When we go to the department for claiming such benefits the officials make us roam from one office to another. We are daily wage workers, and hence we have to work everyday to survive. We cannot waste our days wandering department to department. Red- tapism in the system has deprived us of such benefits, he expressed.

See also  Subalterns’ 19th episode to be aired on April 29

Nagaraj said, “We have weavers’ association, which has been formed recently after lockdown. We must raise our voice in union to fight for our rights.”

Host Kiran informed them that the Government has declared many schemes for the benefit of the weavers. Further, they have announced financial assistance of only Rs. 2000 per annum to weavers’ family, which means nearly Rs. 5 per day which is definitely not sufficient amount to survive. Through this platform he requested Minister Shankar Patil to reconsider the amount.

Dr. Kumaraswamy Bijjihalli, head of the Kannada Department in Loyola College, Bengaluru said that subalterns is a wonderful programme. Weavers’ Colony is situated near Bannerghatta and Loyola College has many students who belong to these families. Our college gives admissions to the students of Scheduled Caste, Scheduled Tribes, Ahinda and all the marginalised communities. We are very happy that NewsKarnataka has come forward and given a platform to express their woes.

He stressed that the handlooms and the textile department should come forward to help the weavers’ community. The department has to sell them raw materials at fixed cost and later has to buy their final products at a considerable amount so that the weavers can come out of the traps of middlemen and get their due payment. Like farmers, Minimum Support Price must be announced for the weavers as well. This will make them sell their products freely at a better price.