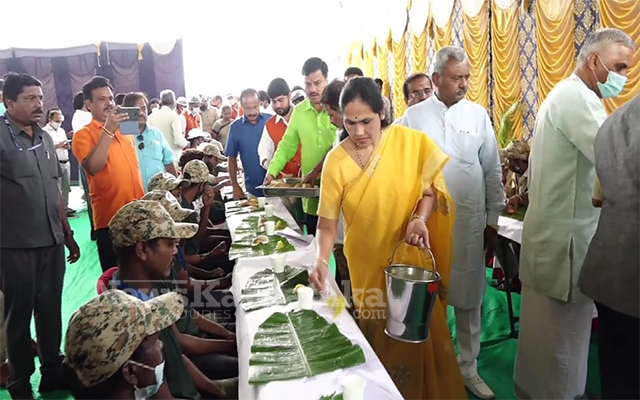 Mysuru: Union Minister of State for Agriculture and Farmers Welfare Shobha Karandlaje said that the APMC law was amended followed by a demand by farmers.

She was speaking to mediapersons on Thursday October 14 after hosting breakfast for mahouts and kavadis of Dasara elephants at Palace premises. She said that the farmer unions are being misused for protest. Those who are staging protests from the last eight months are not real farmers, she alleged and added  that their protest is being politicised in the name of farmers.

Further, Minister said that the Central Government had held several rounds of meetings with the protestors and discussions have been held for more than 11 times. We are ready to talk to them again, she stressed.

To a query over the conversation between Former MP V. S. Ugrappa and Karnataka Pradesh Congress Committee Media Coordinator Saleem pointing at Shivakumar, Karandlaje said “the percentage politics is the culture of Congress party. The UPA Government looted during ten years of their rule and the same system continues in the State.”