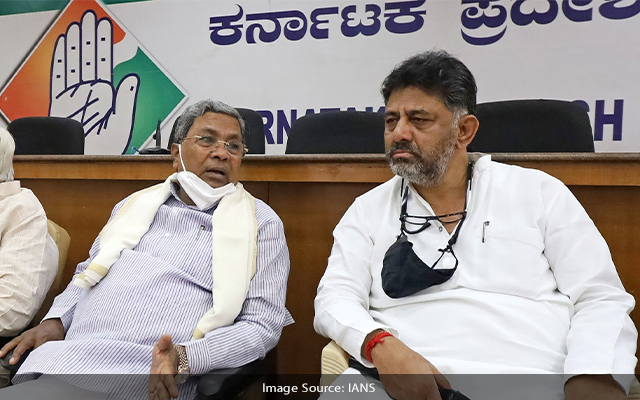 Belagavi: The Karnataka Congress has announced that the party will take out a ten-day padayatra demanding implementation of the Mekedatu project in the State. The yatra will begin from January 9 from Mekedatu and end on January 19 in Bengaluru.

Congress State President D.K. Shivakumar and Opposition leader Siddaramaiah made this announcement in a joint press conference on Tuesday December 21.

“The padayatra is going to be historic. It would begin from January 9 at 9.30 am and reach Bengaluru in five days, a distance of about 80 km. Later, the Padayatra will be carried through various Assembly constituencies within Bengaluru. I call upon people from all walks of life to participate in the historic padayatra,” he urged.

“The project is being implemented on our land, with our money and utilising our water. But, two states will be benefited. There should not be any objection. The cost of the project could be recovered from the generation of 440 mega watt electricity,” he stated.

This is a project to provide drinking water to Bengaluru and surrounding villages. As many 66 TMC water which is going waste would be stored in the balancing reservoir and would be utilized for drinking water purposes and electricity generation. As much as 30 per cent people of Bengaluru are not having proper drinking water supply. To cater to their needs, it is inevitable to implement this project. Along with Bengaluru, Chikkaballapur, Kolar, Bengaluru Rural regions will also benefit from the project, he explained.

The neighbouring Tamil Nadu will also benefit from the project. The water dispute between Karnataka, Kerala and Tamil Nadu has ended after the Supreme Court verdict in 2018. The decision has been given that Karnataka should release 177.25 TMC of water to Tamil Nadu.

“Apart from this, Tamil Nadu has no scope for objections on the project as per law,” Siddaramaiah stated.

The Green Tribunal has also not objected to the project. The project is not being implemented even as there is no objection; a detailed project report is ready and even as Tamil Nadu does not have any legal right. The respective BJP governments at the Centre and the state should have commenced the work of the project, he questioned.

“If we were to be in power, the project would have been taken up by this time. This BJP government does not have the will to implement the Mekedatu project. The padayatra is being taken up as this project would help 2.5 crore people. The BJP, even after two-and-half-years into power, has taken up no irrigation project. This government is busy in gobbling up 40 per cent commission in all schemes and projects,” he charged.

When asked whether the padayatra is a political show off, Siddaramaiah stated that if the ruling BJP starts the work, the padayatra will not be held.