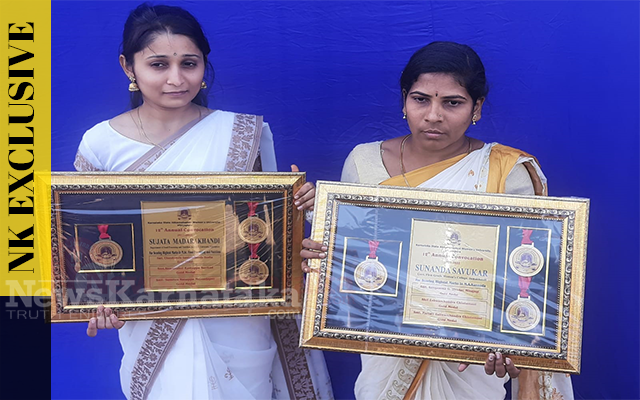 Vijayapura: The excitement and elation was palpable on the faces of  Sunanda Savukar and Sujata Madarkhandi, the daughters of two farmers of Bagalkot District as they secured three gold medals each in the 12th Convocation of Karnataka State Akkamahadevi Women’s University on Tuesday November 9.

Native of Kunchanur village of Jamkhandi taluk and Mugalkhod village of Mudhol taluks respectively, they won gold medals in their different disciplines.
While Sunanda got a gold medal in MA Kannada, Sujata secured gold in MSc Food Processing and Nutrition.

Having lost her father, who was a farmer at her early age, Sunanda was raised by her mother and supported by her paternal uncle. “After the death of my father, my uncle stood for the family and has been taking care of us. My brother is working as PDO in Basavakalyana in Bidar District,” she said.

Having studied in government school and college, Sunanda said that she had passion and profound interest in Kannada language from her childhood. She continued her passion and decided to do MA in Kannada from Women’s University.

Admitting that Women’s University has been encouraging many girls like her, mainly of rural background to continue their education after graduation, she said that if the University was not here, she might not have continued her studies after BA.

“Many parents feel comfortable as the University is meant only for girls as they do not prefer sending their daughters to Universities that have coeducation. Due to this university, the girls of North Karnataka region are able to continue their passion for studies,” she said.

After completing MA, Sunanda now aspires for KAS and wishes to serve people of the State.

Sujata, who is also the daughter of a farmer, said that the family always supported her studies. “My father and mother always encouraged me to study. It is their support that helped me in pursuing my higher education,” she said.

Working in KLE hospital Belagavi as a nutritionist, she wants to continue her career in the field itself.

Meanwhile, both girls have a word of advice for the parents and other girls. They said that the parents should not force their daughters to discontinue education and should not think of early marriage. “They should let their daughters study first, and only if the girls are not interested in studies, then they should think of marriage. At the same time, girls too should have passion for studies. Even if the parents are discouraging, the girls should convince them and study,” they averred.