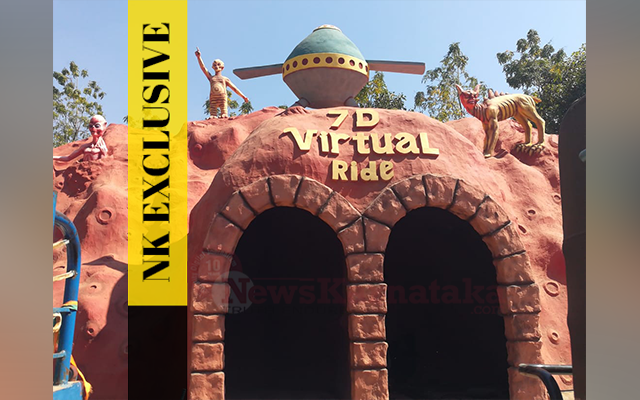 Almatti: Almatti dam garden which already has several attractive recreational facilities, is all set to open one more eye-catching and exciting facility at the grander premises.

Called ‘Thrill Theatre’, this 7-D virtual riding theatre is one of the unique theatres the District is going to have.

Being developed by Krishna Bhagya Jal Nigam Limited (KBJNL), the facility with various sound, light and motion effects is promising to give a thrilling experience to the visitors.

To explain a little about this facility, it has a large cave-like structure that has designs of alien-like creatures. One when steps inside this artificial cave, the visitor encounters a dimly lit area. The seats move according to the movement seen on the large screen giving the feeling of being part of the picture being shown on the screen. The lights, sounds, wind etc. change as per the scenes of the screen.

This 10-minute ride is filled with thrill and gives over the edge excitement to the visitors.

Located near the Jokali sector of Rock Garden, this facility is spread over 5000 square feet and has a large auditorium like a theatre.

According to the officials, the entire project was completed at the cost of Rs. 1 Crore. The contractor has been asked to maintain it for two years after the completion of the project.

The official sources say that the project is expected to be inaugurated on the evening of Wednesday January 26, however no final decision taken yet on it.