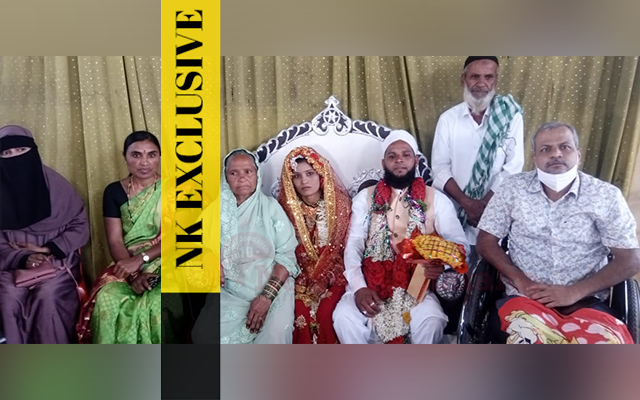 Vijayapura: With the palpable joy on his face while posing for the camera along with his bride, Naushad at his marriage Abubakar Jamadar (30) was entering a new phase of life.

This was perhaps one of the greatest moments of his life after sustaining a grievous spinal cord injury ten years ago which made him permanently disabled. His lower portion of the body from the waist became polarised after accidentally falling from a tree when he was around 20-year-old.

Now at the age of thirty, he has set up a small grocery shop three years ago. He wanted to get married as he already has a source of earnings. But his disability was coming as a major hurdle in making his dream come true. The person who helped his dream come true is Nimish Acharya, President of the Association for People Spinal Cord Injured.

Acharya, who himself is a specially-abled person caused by spinal cord injury, has formed an organisation to fight for the rights of people like him. He not only fights legal battles and strives for their welfare with the Government, but Acharya also tries to get others’ normal and natural needs met. Finding the right life partner and getting them married off is one such responsibility he has been shouldering.

“The people who have become specially-abled because of spinal cord injury too have the right to a dignified life and they too wish to live life like normal people with their normal needs. Marriage and having a life partner is essential needs of humans. But unfortunately, specially-abled people do not get brides or grooms easily as everyone wants a normal wife or a husband. So, finding brides or grooms for specially-abled persons is an extremely tough job,” he said.

Acharya has decided to do his bit in meeting this basic demand of the people who have become specially-abled because of spinal cord injury. “Since Abubakar has been associated with our organisation for a few years, I knew his problems. He wanted to become self-reliant and wanted to earn a living. So, our organisation tried and got a small grocery shop set up for him. When he got financially stable, he expressed a desire to marry. So, our next job was to find a suitable bride for him,” he said.

Acharya said that the family of Abubakar found that one of their distant relatives is also specially-abled because of polio. They first sent a proposal for the wedding, but the family of the girl was not able to make any decision. “When I came to know about that, I wanted to convince the family for the marriage. The family had some doubts which I got cleared and finally, the girl and her family agreed for the marriage,” he said.

Acharya said that after the mutual agreement, the marriage took place a couple of days ago in a simple manner where around a hundred people participated. “I am happy for the couple as they have found life partners. Since both are specially-abled, they understand the strength and the weakness of each other better than anybody else,” he said.

Meanwhile, Abubakar is happy due to the wedding and thanks Acharya for his efforts. Acharya said that their organisation will try to conduct similar marriages, and help people in need.