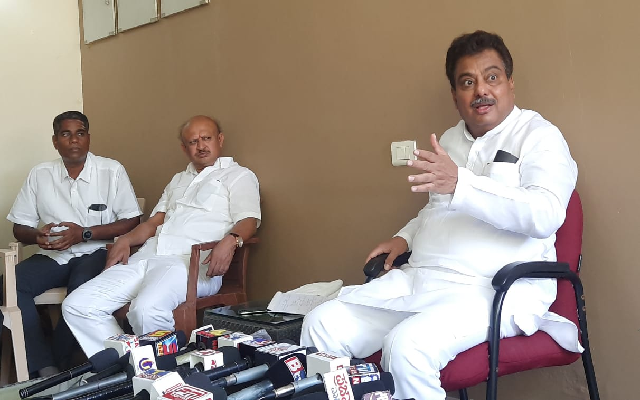 Vijayapura: Terming JD (S) and AIMIM as the ‘B’ teams of the BJP, Former Minister and Congress MLA M. B. Patil said that both the parties are working for the benefit of the BJP in the polls.

Addressing mediapersons on Wednesday December 8, he said, “it is no secret that both the parties have acted like ‘B’ team of the BJP by fielding their candidates only to ensure the victory of the BJP candidates.

“We have seen in the last few assembly polls where JD (S) and AIMIM fielded Muslim candidates despite the fact that the party has no base or strength to win. The objective of fielding Muslim candidate was to defeat the Congress, and directly helping the BJP’s smooth victory,” he said.

Giving examples, Patil said that in Basavakalyana, Sindagi and Hanagal assembly by-polls, the JD (S) gave ticket to Muslims candidates only to split the minority votes with the objective that it would help the BJP.

“When they knew the party will not win still they fielded a Muslim candidate, and it means the intension is clear. They wanted to help BJP in the polls,” he said.

Patil challenged that if the JD (S) has real concern for the Muslims, then let the party field a Muslim candidate in Mandya and Hassan where the party has strength and ensure the victory.

Mentioning about the MLC polls to be held on December 10, he exuded confidence about the victory of the Congress candidate Sunilgouda Patil. He said that the party leaders including Former Chief Minister Siddaramaiah, present and former MLAs of the Vijayapura and Bagalkot Districts have campaigned intensely for the party.

“Sunilgouda won for the first time as MLC in the last by-polls, and now this time also he will win by taking at least over 5,000 votes in the polls for local body constituency,” he said.

Referring to the untimely rains that has caused huge damage to the standing crop of Toor and Grape in the District, Patil said that he has decided to raise the matter in the coming session in Belagavi. He said that he has discussed the matter with leader of the opposition, Siddaramaiah about it and he has asked him to prepare the detailed report for discussing it in the session.

Admitting that many farmers are unable to get crop insurance benefits because of lacuna in norms, he said that several norms have to be changed in order to help more farmers get the benefit of crop insurance. On the occasion, he appealed to the farmers to get their crop insured without fail.