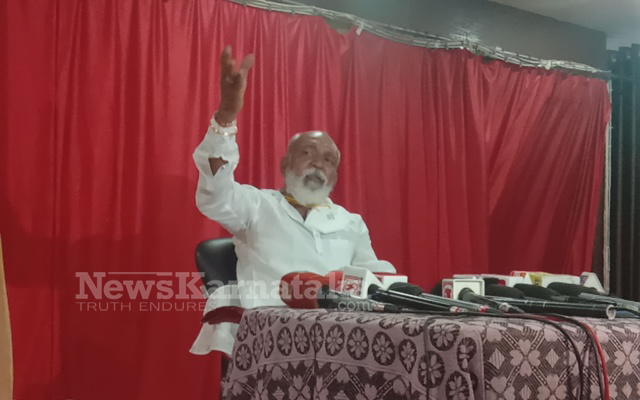 Vijayapura: Stating that city BJP MLA, Basanagouda Patil Yatnal of having lost link between his tongue and brain,  Former MLA and his bete noire, Appu Pattanshetty has said that Yatnal has been giving baseless statements against many leaders of the BJP including Chief Minister, B. S. Yediyurappa.

Addressing presspersons on Saturday, he said that on several occasions, Yatnal claimed that Yediyurappa will be removed from the post of CM.

“ But none of his predictions have proved right and he has become a laughing stock for people. Now people do not take him seriously”,  he said.

The senior BJP leader said that Yatnal has been showing no respect even to Chief Minister, B. S. Yediyurappa as he ensured the picture of Yediyurappa is not printed on the banners made at the vaccination camp.

“ Yatnal gets banners printed for Covid vaccination camp where a picture of him and PM Modi will be there, as if the State has no CM. No doubt the Centre government is giving free vaccines and thus banners will have Modi’s picture, but since the vaccines are given in the State through the State government, thus the banner should have a picture of CM”, he said.

Accusing Yantal of projecting as if he is the one who has brought developments in the city and no other MLA did anything in the past, Pattanshetty listed out projects he brought to Bijapur when he was MLA.

With regard to the delay in holding of elections for City Corporation, he said that some people are deliberately trying to ensure that the elections are not held so that only they will rule the city.

Indirectly referring to Yantal, he said that more delay in elections will help him retain power in the city corporation.

Admitting that the case is pending before the Supreme Court on the holding of election, Pattanshetty said that though he does not wish to comment on the case, he appealed to the district administration to take the lead in convincing the petitioners to withdraw the case and allow the elections to be held.

“ Today with the city having no Corporator, the city’s development is in shambles and people have no representative to tell their grievances”, he said.