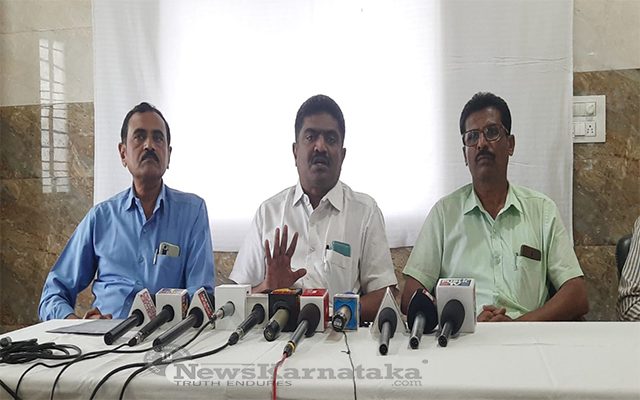 Vijayapura: Expressing anguish over the decision of Pre-University Board of the State to hold preparatory and midterm examinations for the second year PU students from November 29 under the Board itself, BJP MLC Arun Shahapur has accused the PU board of taking unilateral decision without even thinking about the future of the students.

Addressing mediapersons on Wednesday November 17 he said that the way the PU Board is functioning, he doubts whether the Board is part of the government or if it is a separate statutory board which is free from any control of the government.

“I am saying it without any hesitation that there is no difference between the administration of PU Board and Tughlaq Darbar,” Shahapur reacted sharply.

Questioning the reason behind holding such exams in a hurried manner and that too under the Board itself, he said that how can the Board hold preparatory and midterm exams which are generally conducted by the college itself.

“When I inquired with the officials of PU board about the reason, the officials said that since they are expecting a third wave of Covid, therefore, they are taking precautions. The officials said that they will consider the result of this exam as the basis for the final year exam results if the State faces a third wave and colleges remain shut. My question is why the Board is imagining any possible third wave. The decision regarding the final year exam can be taken later. Moreover, the preparatory and midterm exams are conducted at the college level itself. The objective is to evaluate the progress of students and provide additional coaching to the lagging students for their improvement,” he said.

Shahapur wondered how the Board will conduct the exam like a final year exam. “Lot of preparation goes on for the final examination. The question paper is set at the Board level. It is kept in a strong room to ensure that it is not leaked. After the exam, the papers are evaluated at different places. When the system is such then the question is will the Board follow the same procedure even from the preparatory exams. Even if it does, then is there enough time for that,” he questioned.

Alleging that the Board is playing with the future of the students, he demanded the Government and the Chief Minister Basavaraj Bommai to postpone the exam at least by a month for holding discussion with all stakeholders before taking a final and concrete decision that will be in the interest of the students. “Since the decision was taken in a hurry, it is unplanned and many colleges of the State have started at different times due to Covid, it is very important for the exam to be postponed for at least a month for making a right decision,” he said.

Finally, he hoped that the government will take an appropriate decision in the interest of the students.