Vijayapura: At least two cattle heads have perished, and two persons have sustained injuries while property has been damaged due to the heavy rains coupled with gusty winds and lightning that occurred in the District on the evening of Thursday April 28.

The District which is already experiencing blistering heat while the temperature has reached 40 degree Celsius, is also witnessing pre-monsoon rains that are accompanied with thunderstorms, gusty winds and lightning.

On Thursday too the District witnessed heavy winds and lightning which took the lives of two cattle and injured two persons.

According to the District Administration, one each cattle head perished in Hadagali Village of Vijayapura Taluk and Ingleshwar Village in Basavanabagewadi Taluk. Two persons have sustained injury due to lightning in Vijayapura Taluk while tin sheets of a government school in Ingaleshwar Village of Basavanabagewadi have flown away in the gusty winds.

With regard to the crop damage, there is still no detailed information as the officials said that they are assessing the damage. However the report from various villages is claiming some loss to standing plantations such as banana.

With regard to the quantum of rains, the officials said that the District has received only an average of 1.23 mm rains. Vijayapura Taluk has received the highest 5.12mm of rains, though the rains were not too heavy, the winds and lightning have caused major damage.

The gusty winds have damaged properties and lightning has killed cattle heads, but the same rains and winds have also helped in lowering temperature for some ime. Since the people were suffering from scorching heat in the ongoing summers, the rains and winds have brought some relief from the blistering heat. But that relief lasted only for overnight as the temperature again rose on the morning of Friday April 29 morning with the same intensity.

Amid this the District Administration has advised the people to stay hydrated and avoid venturing out of the house between 12.00 pm and 4.00 pm as the heat remains at its peak. People also have been advised to carry water bottles if they need to venture out in the afternoon and cover the head with caps. 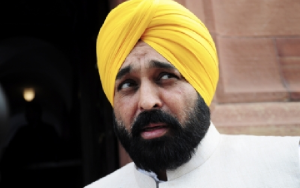