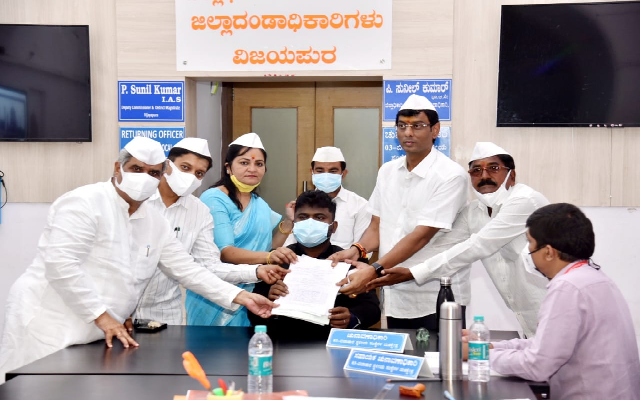 Vijayapura: The candidates of two leading parties, the Congress and BJP filed nomination papers for the coming MLC election for Local Bodies’ Constituency on Tuesday November 23.

While the sitting MLC Sunilgouda Patil of the Congress submitted his nomination papers, P. H. Pujar of the BJP, a former MLA filed nomination papers in the presence of various leaders of the party. With this, it has now become certain that the Vijayapura-Bagalkot MLC constituency has two seats, however both the national parties have fielded only one candidate each to ensure the victory.

While there was a problem with the Congress in finalising the candidate, the BJP did not have such an issue. The party did not face resistance from any other aspirant and the ticket was given to Former MLA and veteran leader P. H. Pujar.

Speaking to media persons after filing the nomination, both candidates exuded confidence of their victory. “We thank Congress President Sonia Gandhi, AICC General Secretary, Randeep Singh Surjewala, Former Chief Minister, Siddaramaiah Karnataka Pradesh Congress Committee President D. K. Shivakumar and all leaders of the District for supporting my candidature,” he said. Pujar too thanked the party leaders for considering him for the post and offered him a ticket.