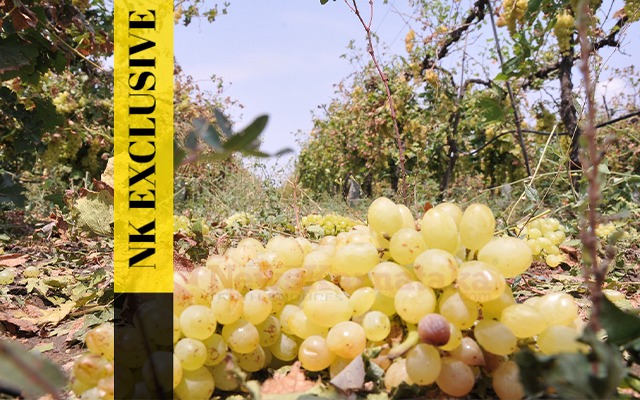 Vijayapura: The unexpected showers accompanied by hail storms that lashed this week have spelt trouble for grape growers eyeing for a good season as there have been reports of extensive damage to the grapes in several parts of the district.

For the past week, several parts of the district received rainfall. This has hit the grape growers hard as in many regions the crop was on the verge of harvesting. Moreover, the farmers were eyeing for a good season as amid poor climatic conditions they have got a good yield and also price for the raisins in the wholesale market after two years.

Sangamesh Kondaguli, a grape grower and resident of Sangapur village of Babaleshwar pointed out, “The unanticipated rainfall accompanied by hail storm has damaged the fruit completely. I had got good yield but the rain has snatched the profit of this season. Apart from this, around 1.5 tonnes of raisins, which were in the making, have also been damaged in this rain. We were hoping for a trouble-free harvesting season but that was not to be.”

Many farmers that have taken loans this season are in a state of worry as they have lost their crops to this unexpected rainfall. Bijapur is the highest producer of grapes and raisins in the State.

“Every year the grape growers will face one or the other problem. In the previous two seasons, we had a good yield but there was a poor price for the raisins due to the pandemic. This year, raisins got good prices but the entire yield got damaged because of showers. I have taken a loan to save my crop this year but everything went in vain. The State Government has to compensate the farmers that suffered a loss due to rain,” urged Veeresh Bandiwoddar a grape grower.

The officials of the department of horticulture have made a rough survey about the crop loss suffered by grape growers due to recent rainfall.

S. M. Bargimat, Deputy Director of the Department of Horticulture said, “It is true that many grape growers have suffered a loss due to unexpected rainfall. It is not just rain but hail storms and speedy wind have also damaged table grapes and raisins in Sarwad, Athalatti and many villages. We are yet to carry out the detailed crop loss survey.”