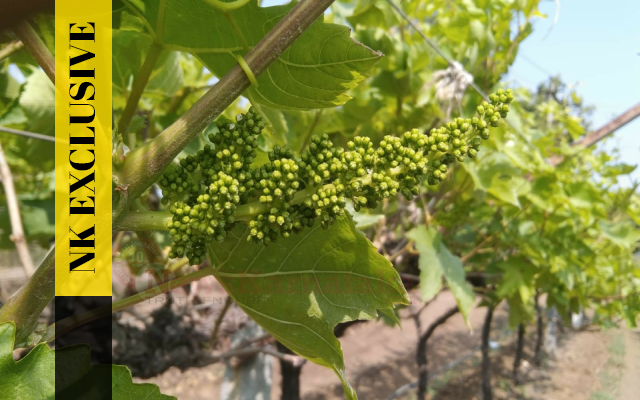 Vijayapura: The recent rains and prediction of continued cloudy weather in Vijayapura District, has put the grape farmers of both districts which includes Bagalkot in distress as the rains at this stage of yield can cause a significant loss. The farmers who were expecting a good harvest this season as they had a conducive climate, now are distressed due to adverse conditions playing havoc.

According to the Karnataka State Forecast, Vijayapura is likely to receive moderate to heavy rains till November 22. The rains could be coupled with hail storms. The region is likely to witness showers anywhere between 2.5 mm to 15.5 mm.

Sharanappa Gogihal, one of the grape farmers of Babaleshwar Village claims that it is for the third successive year that the farmers are facing vagaries of nature. “The flowering season has already started but the dark clouds have increased the fear among the grape growers. If the heavy rains coupled with hail storms occur it will damage the flowers completely and lead to fungal diseases.”

He said that it will also increase the expenses by at least threefold as the fertilisers have to be sprayed in order to prevent the plants from the bacterial infection. “Even the price of diesel has skyrocketed. The government has to come to the rescue of grape growers because the farmers are suffering from the past three years.”

It may be noted that due to the heavy showers and hail storms the farmers have suffered a loss of at least 25 percent of their crops (grape) in the past two years.

Dr. S. G. Golagi, Horticulture expert said that the continuous rains could damage the grape plantation and will be infected with fungal diseases causing leaf loss and lack of stem growth. The plants will be infected with fungal diseases like powdery mildew, anthracnose, downy mildew and other bacterial diseases. This will be preventing the plants from growing flowers and fruits, which will result in fewer yields. However, if plants get enough sunlight there is less chance of damage to the crop.

S. M. Bargimath, Deputy Director of the Department of Horticulture said that he will write a letter to the scientists and experts seeking suggestions and control measures to tackle this climate. It is for the third successive year that the farmers are being hit by the bad weather. The farmers have also geared-up to purchase fertilisers and are likely to start spraying in a day or two to protect the plantation from diseases.

“However, the farmers will be benefitted with insurance as most of them have insured their crop. In the previous fiscal year alone, a record Rs. 123 Crore of insurance was claimed by the grape growers in Vijayapura,” he said.