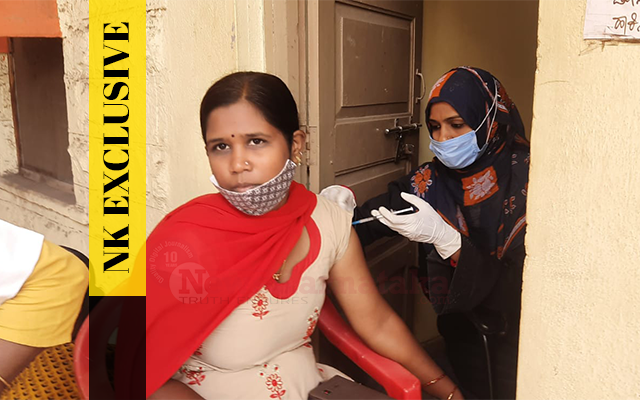 Vijayapura: The efforts of District Administration and the Zilla Panchayat have finally reaped success as the district not only achieved the target of vaccinating one lakh doses in a single day, but it has crossed the given target.

The government, as part of the mega vaccination camp held on Friday September 17, had set a target of administering a vaccine to one lakh people of the district in a single day.

Taking the challenge, the District Administration and the Zilla Panchayat have together ensured that over 1 lakh people got vaccine doses on Friday.

“Though our staff is still uploading the details, based on our last report, we had already vaccinated one lakh and three thousand people of the district. The number is expected to increase when we get the final figure”, said Deputy Commissioner, P. Sunil Kumar.

He said that elaborate arrangements were made for the mela, for which they took only four days to complete because the government had issued directions about it only four days before the event.

It was a big challenge to prepare the mega event in only four days. But the district administration was determined and required preparations were made, he said.

“We had involved Gram Panchayat officials, revenue officials and Health officials for the event. Extensive awareness programmes were held across the district to ensure that more people visit the vaccination centres on the day”, he said.

Stating that special task forces were constituted for the purpose, he said that NGOs such as Sambhav and Azim Premji Foundation offered manpower for the event.

He said that 547 centres have been opened in the district for the vaccination.

ZP CEO, Govind Reddy who too had played a crucial role in holding awareness programmes in rural areas to bring more people to the vaccination centres, said that the Gram Panchayat task force mobilised people.

“Our staff identified unvaccinated people by visiting door to door and motivated them. All such unvaccinated people were brought to vaccination centres by Panchayat Development Officers, Asha, Anganwadi workers and GP members. Awareness activities were intensely done in resistance pockets in advance”, he said.

With high morale after successfully conducting the drive, the administration believes that they have proved that they are capable of holding a mega mela every week if the government asks for it.