Bengaluru: In the second such incident in two days, another old three-storey building collapsed in Bengaluru on Tuesday September 28, leaving five people injured even as 18 families who lived there had a narrow escape.

The incident was reported from KMF Quarters near Dairy Circle in the City. Luckily, the families staying in the building managed to rush outside as they saw cracks before the collapse.

Eyewitnesses said that the couple, who were stuck on the second floor, threw their small child down and the child was safely caught by the people on the ground. The couple did it, fearing a collapse at any moment and they also rushed downstairs. 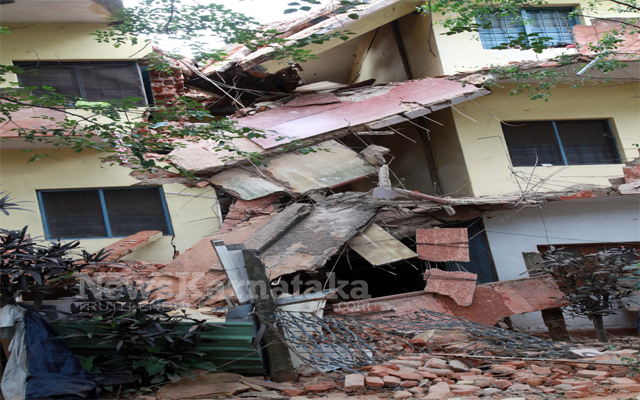 Fire and emergency services personnel rushed to the spot and helped in the evacuation. They rescued two pet dogs stuck in the building.

Members of 18 families who escaped safely, mere moments before the collapse of the building, said that even after many complaints about the condition of the building, the authorities did not initiate any action.

A major tragedy was averted in Bengaluru on Monday as a three-storeyed building collapsed in Lakkasandra near the busy Wilson Garden area. Luckily, as many as 50 people who lived in the house had gone out to work and police said, there are no casualties in the incident.

The BBMP maintained that notices have been issued to 76 old buildings in the City, and it has identified 198 buildings for issuing notice. Investigations are on.