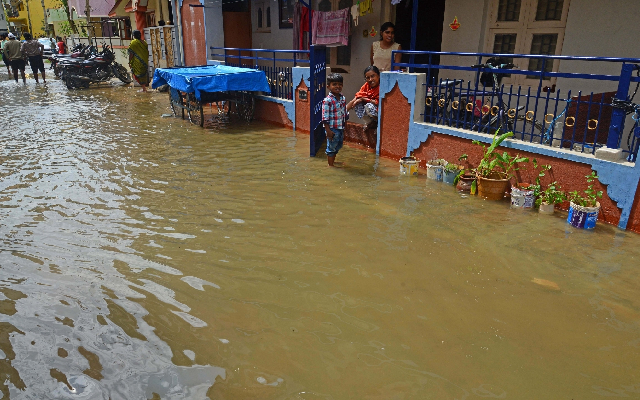 Following this, Chief Minister Basavaraj Bommai announced clearance of encroachments of Raja Kaluves (storm water drains) across the city which is causing flooding. However, the ambitious goal of Chief Minister Bommai is going to remain a distant dream and announcements are going to remain just as fancy statements according to experts.

N.R. Ramesh, BJP Bengaluru South District President stated to IANS that the statement of the Chief Minister Bommai is correct. But, officers concerned with Raja Kaluves (storm water drains) have failed to explain ground level realities with available documents to him.

Bengaluru has a primary and secondary drain network of 842 kilometers among which only 440 kilometers is existing now. The rest is encroached by builders who are members of the Confederation of Real Estate Developers’ Association of India (CREDAI) and Bengaluru Realtors Association of India (BRAI). “It is not possible to vacate the encroachments. It is not at all possible,” he explained.

Ramesh further said, “Based on my complaint and as per the orders of ACMM court, FIR has been filed in the Bengaluru Metropolitan Task Force (BMTF). As many as 97 builders and 41 officers have been booked for encroachments of storm water drains, buffer zones, lakes in the city, Ramesh said. The BBMP has not bothered to get the stays vacated for the past six years in the court against encroachers,” he said.

However, when contacted, Suguna, Chief Engineer of Storm Water Drains, Bruhat Bengaluru Mahanagara Palike (BBMP) told IANS that the process of removal of encroachments will be taken up from Monday onwards.

“We are coordinating with survey officers and as per the directions of the Chief Minister, action will be initiated. The machinery was busy in handling the corona crisis, we will chalk out a time table and start removal of encroachments,” she said.

Sources said the BBMP, the civic executing agency, is ready with the list of encroachments and to carry out operations to vacate illegal buildings that have come up on storm water drains.

The encroachment drive that was taken up years ago after heavy rainfall was stalled due to political pressure in 2016. The officers have identified and listed more than 2,000 storm water drain encroachments. The BBMP has vacated 802 illegal buildings so far.

As many as 1,153 encroachments are due for demolitions. This time, it is being planned to carry out a drive against encroachments and fence them to protect illegal occupation in future. But, all depends on political will, sources said.

Kavitha Reddy, Vice President of B. Clip Alumni Association and Lake Activist opined that the stand of the Chief Minister is good, but, it is going to be a fancy statement. “The Chief Minister just can’t do what he promised. The same BJP leaders, including Union Minister for State Rajiv Chandrashekar opposed clearance of encroachments. It seems more like a convenient statement for the BJP,” she said.

Before vacating encroachments, lake encroachments should be cleared. Footpaths, roads, most of the empty spaces and even drains are concretised. The Smart City Projects implemented in Bengaluru have engineering defects. The mindset has to change and with the holistic approach solutions have to be found, she explained.

Raghavendra Poojari H.S., a social activist said the announcement is an election gimmick. As soon as the demolition drive is initiated, people would move to court and it will not take off. “Once in 20 years such a flood situation is witnessed and then everyone will forget about it,” he said.