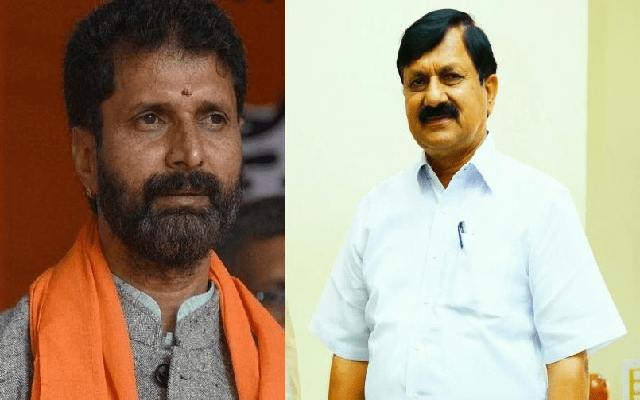 Bengaluru: The Congress has lodged a police complaint and sought the arrest of state Home Minister Araga Jnanendra and BJP National General Secretary C.T. Ravi for their provocative statements in connection with a youth’s murder in Bengaluru.

Chandru, 22, was murdered in the J.J. Nagar police station limits of Bengaluru on Tuesday April 5 midnight in a road rage case.

A delegation headed by Congress leader Manohar lodged the complaint and said the statements were intended to paint whole of the Muslim community in bad colour.

Jnanendra on Wednesday said that Chandru was murdered for speaking in Urdu with the accused persons. “The murder has been carried out for refusing to talk in Urdu and for insisting to talk in the Kannada language. He had been stabbed to death. The police have arrested a few persons and a hunt is on for other accused persons,” Home Minister stated. “This is a barbaric incident. After the quarrel, they have suddenly stabbed and killed him. I have asked the police to initiate action,” he said.

Later, the Minister backtracked and apologised for his statements. He clarified that the murder was a result of road rage.

National General Secretary and BJP MLA C.T. Ravi had also jumped the gun on the issue that Chandru was hacked to death for speaking in Kannada.

“The incident should not be seen in isolation and there are provocations behind such a mindset. What is happening in Kashmir could also take place in Karnataka. I condemn the incident. Progressive thinkers have turned a blind eye to the incident. Congress leaders won’t shed any tears if a Hindu is killed and Opposition leader Siddaramaiah won’t pay condolences if the victim is a Hindu,” he said

Both the leaders were slammed by the Opposition Congress and JD(S). Lashing out on the statement of the Home Minister, Siddaramaiah dubbed him as an inefficient minister. “He had given statements like this in the murder case of Bajrang Dal activist Harsha and Mysuru gang-rape case. He is not able to maintain the portfolio. It is unfortunate that such a person is our Home Minister.

“Initially, he stated that Harsha had criminal cases against him and later denied. In Mysuru gang-rape case, he had said that why women should come out during odd hours to isolated places,” Siddaramaiah said.

Former Chief Minister H.D. Kumaraswamy stated that the Home Minister is not serious about his job. “He had used the word ‘Dalit’ instead of ‘Hindu’. This is a trivial statement. He has started to carryout political agenda in murders also in the state,” he said.