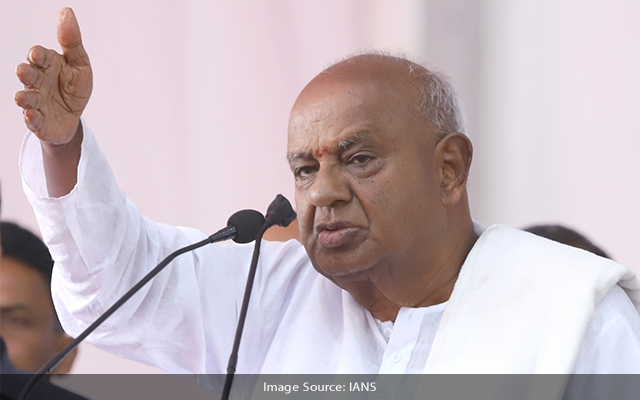 Bengaluru: Former Prime Minister H.D. Deve Gowda on Monday September 27 said that he is still alive and he would take up a tour of all the districts of Karnataka to strengthen his party, the JD (S).

Hitting back at Karnataka Opposition leader Siddaramaiah for calling JD (S) a ‘B’ team of the BJP, Deve Gowda said it is time one should ask who helped the BJP form the government in the State.

Siddaramaiah had launched a poignant attack on JD (S) recently and questioned the credibility of former Chief Minister H.D. Kumaraswamy in public rallies.

Responding to Siddaramaiah’s sharp attack on JD (S) that it is not a statewide party, Deve Gowda said, “I will explain to the people why our party JD (S) should survive. Siddaramaiah who came to the limelight from JD (S) tried to finish off the party by joining hands with MLA Zameer Ahmad Khan and a bureaucrat Ateeq. After distributing money for all masjids, Siddaramaiah could win only 78 seats in the last State Assembly elections,” he explained.

“I visited and consoled Siddaramaiah after the death of his son. If he wanted to anoint his son to the higher position, let him do it after winning elections. Siddaramaiah, you should talk the truth,” Deve Gowda said.