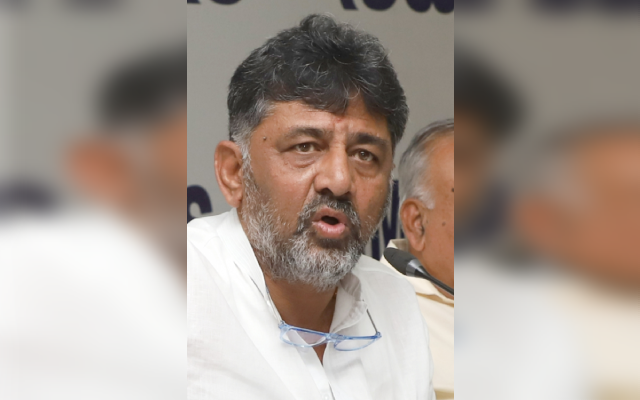 Bengaluru: With exit polls pointing to a possible hung Assembly in Goa, the Congress is not taking any chances of being pipped to the post and has deputed Karnataka Congress President D.K. Shivakumar to monitor and strategise to attain power.

Shivakumar left for Goa on Tuesday March 8 after getting directions from Delhi.

Sources in the Congress state that he is going to camp in Goa for three days to ensure that the age-old party, which missed a chance to form the government by a whisker after the last Assembly elections, do not commit the same mistakes again. Shivakumar is going to stay put in Goa till the new government is formed if needed, sources added.

Sources close to Shivakumar said that he will put in maximum efforts to install Congress government in Goa, as he is eyeing for the post of Chief Minister in Karnataka after the Assembly elections in the state 2023. “This is an opportunity at the right time for Shivakumar to impress the high command, which will take him one step closer to the coveted position.”

ABP-C-Voter exit polls have projected 12 to 16 seats for the BJP, 13 to 17 seats for Congress, 1 to 5 seats for AAP, 5 to 9 seats for MGA and alliance and two seats for independent candidates this time. Though the Congress had emerged as the largest party in 2017 Assembly elections by winning 17 seats, BJP seized the opportunity and managed to form the government in Goa. BJP had then deputed Union Minister for Road Transports and Highways of India Nitin Gadkari as a trouble-shooter.

Dinesh Gundu Rao, former Karnataka minister, who is in-charge of Goa Congress desk, has said that if his party falls short of the majority mark of 21 seats, it will seek the support of allies from Aam Aadmi Party (AAP), the Maharashtrawadi Gomantak Party (MGP) and Trinamool Congress to form the government.

Shivakumar is regarded as a master strategist and seen as a person who can handle any situation for the party. He played a key role in installing the Congress-JD (S) coalition government even as the BJP emerged as a single-largest party in Karnataka in the last Assembly elections in Karnataka. He has come to the rescue of the party whenever its government is threatened in Maharashtra. He hosted the Congress MLA’s in a resort much to the chagrin of the BJP.

Later, Shivakumar was jailed for 50 days in Tihar jail in a money laundering case lodged by the Enforcement Directorate (ED). Shivakumar had stated that he was sent to jail because he did not join the BJP. With huge resource capabilities, aggressive and bold decisions, Shivakumar could prove to be a shot in the arm for the Congress party in the crucial negotiations with the legislators of other parties in Goa as well.

The BJP has delivered jolt after jolt to the Congress in Goa as its strength has been reduced to two in the House. Even after this, the Congress has made a comeback in the elections and the grand old party is leaving no stone unturned to attain the power in Goa.