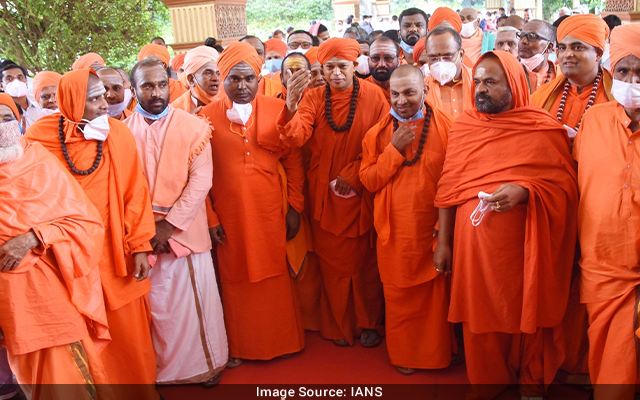 Bengaluru: More than 200 Veerashaiva-Lingayat seers congregated on Sunday and tried their best to exert pressure on BJP’s central leadership that incumbent Karnataka chief minister, B.S. Yediyurappa should not be replaced till the ongoing Assembly term ends in 2023.

A section of seers even appealed that the Lingayat seers of every sect should be united and float their own party and ensure that the next chief minister is from one among the seers like in Uttar Pradesh, where Yogi Adityanath is the chief minister.

Setting the tone of the meeting in his opening remarks, Sri Dingaleshwara seer of Balehosur Matha clarified that the seers meeting should not be seen as opposing the BJP or its central leadership per se, but this is being done to fight against the ‘injustice’ towards a person, who toiled hard to build a party to this level in the state.

Coming down heavily on a section of media, Dingaleshwara seer rebutted that the day-long meeting of seers was not organised at the behest of Yediyurappa or his (younger) son, (B.Y.) Vijayendra (who is also BJP’s vice president in the state). “We do accept offerings, but a section of the media tried to portray that seers were accepting ‘bribe’ to organise this meet. When we accept offerings from devotees of Matha, such offering is used for feeding the poor, unlike mediapersons who accept gifts from politicians but it is spent in bars and clubs,” he chided.

He added that it was Yediyurappa who started a new practice of handing out portions of funds to various religious Mathas, until then it was Pontiffs who had to keep visiting politicians to seek grants. “It is he who started it and his successors such as Siddaramaiah and H.D. Kuamaraswamy too continued it. Therefore, there is nothing wrong in defending such a person (Yediyurappa), who honoured us when he was in power,” he said.

While another prominent seer, Tiptur Matha’s Sri Rudramuni appealed to the seers of various sub-sects to come together under single platform and float a party to teach a lesson to the BJP in next elections. “If Lingayat seers can be united, floating a party and winning an election won’t be a problem. We can have the first ever ‘seer’ as the CM in Karnataka like it has happened in Uttar Pradesh,” he said.

Nidumamidi Matha’s Veerabhadra Chennamalla Swamiji appealed to the BJP party high command to rethink over its decision to replace Yediyurappa at this critical juncture. “At present the state is reeling under unprecedented floods and imminent threat of possible third wave of the Covid is lurking, therefore, the BJP high command should be considerate enough to give Yediyurappa a lifeline of six months before changing the guard in Karnataka,” he said.

One of the most prominent seer Sri Shivamurthy Murugha Sharanaru of Murugarajendra Matha said, his Matha has the history of supporting late Karnataka CMs, Ramakrishna Hegde, S. Bangarappa and Siddaramaiah whenever these leaders faced dilemmas in public life. “Our Matha’s guiding principle is to back a person, who has been pushed to the wall due to injustice heaped upon him. In the past, our Math has stood behind CMs like Hegde, Bangarappa and Siddarmaiah and this time too I will stand by Yediyurappa,” he said.

Several Lingayat seers spoke during deliberations, demanded that the BJP should not effect the leadership change in the state.